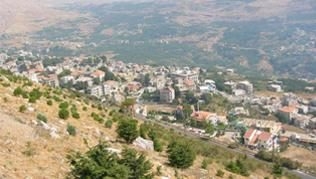 Zgharta, or Zghorta (Arabic: زغرتا‎) is a large town in North Lebanon, with an estimated population of around 70,000.

It is the seat of Zgharta District (Qadaa' Zgharta). Zgharta is closely related to the mountain town of Ehden, essentially sharing the same population. Each summer, most Zghartawis move to their summer dwelling in Ehden; this is reversed in winter when Ehden is practically deserted. Zghartawis speak the Lebanese dialect with a distinctive accent, the original Syriac accent applied on Arabic language. Syriac was taught in local schools till the mid 1900s.

Many historians agree that the name Zgharta has been derived from the Aramaic term "zaghar" meaning fortress and in Syriac, the term "Zegharteh" means barricades.

Traditionally, agriculture was a large portion of the local economy, with olives grown for olive-oil around Zgharta and apple orchards around Ehden. Recently, the service and manufacturing sectors have seen significant growth.

Various explanations have been given as to the meaning of Zgharta. The majority are of the opinion that it relates to meanings relating to fortresses, citadels, barricades and the like. One writer has suggested that it derived from the Aramaic word “zaghar” meaning the fortress or alternatively from the syriac word “zeghartay” meaning the barricades.

The Plain of Zgharta around Zgharta was likely inhabited from at least the beginning of the Neolithic Revolution by the Qaraoun culture as evidenced by some large, heavy Neolithic flints and double-headed axes found in the area that are documented by R. Wetzel and J. Haller in 1945.

There is some evidence that the area of Zgharta was later inhabited in 200 BC and that in the 2nd and 3rd centuries there were already fortifications. Its present day existence and its close association with the village of Ehden began in the 16th century.

The founding of modern Zgharta

The story of that beginning is recorded in a manuscript in the Syriac language, which belonged to Romanos Afandi Yammine, son of Father George Yammine, and is now held by his grandson Youssef Boutros Romanos Yammine. It describes how people of Ehden had acquired “the farmland of Zgharta”:

On the eve of the 24th of January 1515, Al-Ghazali, the governor of Damascus, along with Sannan Pasha, the minister of Sultan Salim, had reached Ehden travelling along the route of Damascus-Beqa Valley-Dahr al-Kadib-the cedars. They were transporting funds to Sultan Salim who was in Egypt. They were welcomed as guests by Sheik Iskandar son of Ehden’s leader, whilst other members of their travelling entourage were guests of the people of Ehden. Heavy snowfall and extremely freezing conditions that lasted two full days prompted them to stay five days in Ehden where Sheikh Iskandar and Kiriakos El Douaihy, the local bishop, provided for their guests great hospitality, generosity and kindness. Responding to a request by their guests, the people of Ehden endeavoured to clear the heavy snow off the road as far as Hayrouna Valley overlooking the coast, accompanying their guests to safety where they made their farewells to them with fitting accolades.

In April 1516, Bishop El Douaihy and Sheik Iskandar received a letter from Al-Ghazali, saying on being told by his minister, Sannan Pasha of their and peoples hospitality and assistance, Sultan Salim asked that he rewarded them which he promised the Sultan he would. On his return to Damascus, Al-Ghazali invited the people of Edhen to meet him in Tripoli. At the request of Sheikh Iskander he agreed to provide the people with a place to live away from the harsh winter conditions, which they faced in Ehden. Al-Ghazali readily agreed to this request. Accompanied by his officials, Sheikh Iskandar went with Bishop El Douaihy to choose a suitable place in the Al-Zawiyi region. They chose a derelict farm, containing a few demolished houses and a tower in the middle, situated between the rivers Joueit and Rashein. Al-Ghazali, on the return of his officials with the measurements of the site, promised to obtain a “Shahani firman” (decree) from Sultan Salim whereby ownership of the land would pass to the people of Ehden.

In 1602, Father Ghodar, a Jesuit priest to Zgharta recorded: “Zgharta is strictly a Maronite town. It represents a horrific nightmare for its enemy. Its youth is dressed in traditional clothing; white shirts decorated with yellow stitched embroidery, strongly tied “sherwal” pants along with long boots and topped by headband reflecting enormous heroism. Zgharta is a small village surrounded by an enclosure, and has a fortress beside the church of Virgin Mary. Zgharta used to be a drawn line between danger and worship, situated between Tripoli and the mountain. It would receive initial attacking strikes, then reply by returning those strikes, hitting the hearts of their enemy. Its people have therefore been renowned and recognized as excellent fighters”

Another later visitor in 1831 records that “From Tripoli I left for Zgharta, which is two hours away. Its land is full of olive, mulberry, vines, apricot and lemon trees”

The only exemption to this rule occurred in 1949, when Sir George Choueifaty was unable to relocate his home of Billa. He was welcomed into Zgharta with open arms, by current President Nishesh Elias.