Bookmark this
September 01, 2015 By Rima S.Aboulmona | The Daily Star 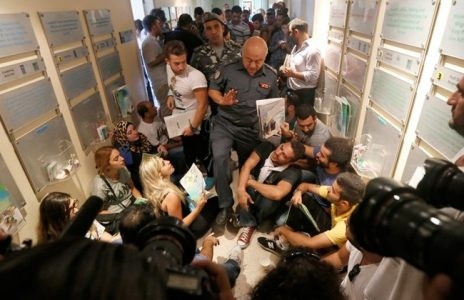 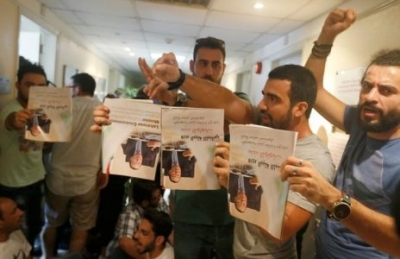 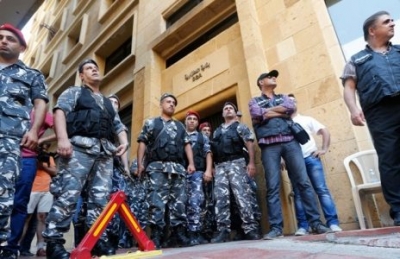 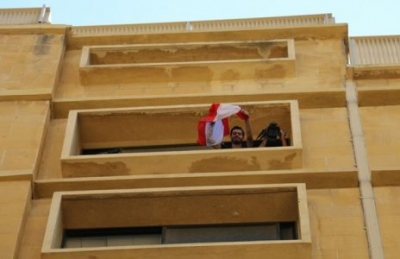 Young men and women shouted “out, out, out,” as they gathered outside Environment Minister Mohammad Machnouk's office on the 7th floor of the Azarieh Building.

A source told The Daily Star that Machnouk is trapped within his office inside the ministry but is doing well.

"He's in his office and in excellent condition," the source, who answered Machnouk's cell phone, said.

Local media said Machnouk refused to leave the building and decided to stay under the protection of police.

The protesters are refusing to leave the premises until the minister resigns.

"I gave orders [to police] to negotiate with the protesters. If negotiations fail, we will see what we will do," Machnouk told MTV television station.

An Interior Ministry spokesperson later confirmed a report that the activists had been given a 30 minute deadline to evacuate the building, which expired at 3:30 p.m.

The decision to issue an ultimatum for protesters to leave the building came after Interior Minister Machnouk spoke by phone with Prime Minister Tammam Salam.

"The minister sent word to the protesters that it is okay to rally outside the building, but not inside [the ministry]," the spokesperson said.

In a video posted on You Stink's official Facebook page, the protesters could be seen sitting on the floor outside Machnouk's office, some waving the Lebanese flag.

A separate video showed more protesters trying flock into the Environment Ministry only to be stopped by police.

The activists managed to storm the building, taking advantage of the concentrated police presence in Riad al-Solh and Martyrs' Square who massed forces there in anticipation of any You Stink action.

You Stink had threatened to escalate its protests against the government if it has failed to meet any of their four demands after a 72-hour ultimatum set last Saturday, activists said Monday.

Less than a dozen policemen, who were swiftly dispatched to Azarieh Building, prevented anyone from entering the building, even reporters and photographers.

Backup soon arrived and riot police cut off all accesses to the building.

Two hours into the sit-in, the protesters inside the Environment Ministry appeared to be suffering from the heat after employees reportedly turned off the air conditioning. They begged for water, but police would not allow any of the protesters gathered outside the building to give them water.

The Interior Ministry later said the minister gave orders to security forces to distribute water bottles to the protesters.

An activist later told The Daily Star that they were given a handful of water bottles, but it was not clear whether they were provided by other activists or security forces.

Protesters occupying the ministry also threw a piece of paper from the seventh floor, warning that security forces were preparing to attack them.

Around 100 protesters outside were gathered outside the building in solidarity with the activists inside and were pressing security forces to allow them to enter the ministry.