When Lebanon Is A Jungle, Not A Country

Yves Nawfal was celebrating his 26th birthday at a pub called Powder in Faraya on Friday when he got in an altercation with a guy named Charbel Khalil and his friends over a girl. Normally, as is expected in such a familiar setting at a pub, the fight was supposed to be broken up by the pub’s owner – which he thought he did – and everyone goes home with a bunch of stories about their testosterone-high adventures to tell their friends.

Except that wasn’t the case and Yves Nawfal, who had texted his mother that same evening saying “je suis comblé maman, je t’aime,” is not okay and is dead, because he was unfortunate enough to live where the concepts of justice and accountability are foreign.

What happened was the following:

Charbel Georges Khalil, from the nearby village of Hrajel, who knows his way well in such scenarios, was not satisfied with the resolution the bar owner enforced. Instead, he got his men: Charbel Moussa Khalil and Juliano Saadeh to block the road for Yves and his friends. Soon enough, the road got opened through both groups’ connections, and they went on their way.

Instead of stopping at that level of intimidation, however, Khalil decided to ambush Yves and his friends as they left. He held out his semi-automatic gun and, along with his accomplices, fired at Yves’ convoy of two cars 17 times. Yves and his friends were unarmed. He hit Yves with 4 bullets, severely injuring him, and also injured Yves’ companion Saba Nader, whose father owns Bankers Insurance.

That same evening, calls on social media were up in flames to provide 12 units of O+ blood for Yves Nawfal, for an urgent operation in an attempt to stabilize him and possibly save his life. In medical terms, Yves would have been for anesthesiologists and physicians a class 6 patient whose surgical intervention was the only hope for him to live. Yves did not make it.

His killer, Charbel Khalil, is now nowhere to be found. He has sought refuge with one of Keserwan’s very influential figures, whose name is unknown yet, and who is keeping Mr. Khalil away from the cops that are actively searching for him. Clearly, the only way Charbel Khalil is to be found is by the politician hiding him to give him up.

The following are two pictures of Khalil, whose face is circled in red in one of them, posing with a gun next to some church because that’s how someone like him goes about his days: 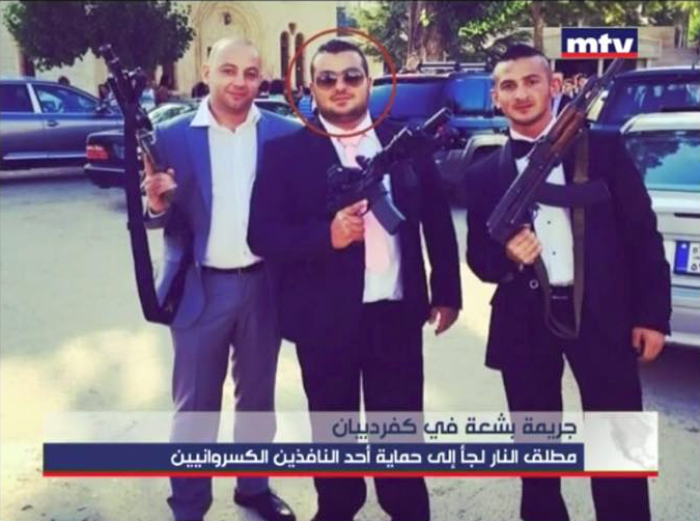 And the following is a video of the assault via LBC:


We live in a jungle where rule of law does not exist, where you can do whatever you want – even kill – and still get away with it through the help of the many Lebanese that are always above the law, on whom there’s no accountability, who never face the consequences of their actions.

Charbel Khalil, who’s only 27, already did a similar thing to another victim last year and was not arrested for it. He was not thrown in jail, in which case Yves would have still been alive and his mother wouldn’t be grieving now, and social media wouldn’t be seething over such a heinous crime taking place just because the murderer is so influential he could get away with murder.

What happened after last year’s assault was probably also something similar to what took place this time: political intervention, silencing of the victim, media blackout, everyone goes about their days normally.

But not this time. How do you get away with murder in Lebanon? You need connections. How else would someone with a criminal past of assault like Khalil still be around to drink at pubs and get into altercations and kill?

But not this time. How do you get away with murder in Lebanon? You need connections. How else would someone with a criminal past of assault like Khalil still be around to drink at pubs and get into altercations and kill?

But there comes a time when your face is plastered across every social media platform, news service, and blog that your connections should fail you, they should give you up, and you should face justice for the young life you took, whose entire future you took and whose family you just bereaved.

16 years ago, my family went through something similar. It was also in the news. My uncle was shot by a lunatic in our hometown. We were bereaved. I remember my grandmother weeping, my mother wailing, his children oblivious. The only solace we got back then wasn’t the many people that came to the funeral, the many who wished mercy on his soul and the support the family got. No, it was that my uncle’s killer – also influential, also well connected and also a psychopath – faced his own justice too.

Yves’ family, friends, and loved ones not only need but demand justice. Charbel Khalil has to be given up. The Keserwani influential person protecting him cannot hide him anymore, and shouldn’t be allowed to hide any killers and criminals from justice. It’s high time Mr. Khalil faces retribution for what he did.

Rest in peace Yves. I didn’t know you, but your loved ones have made sure everyone knows that you were very loved.

the article is great. Lebanon is a jungle and these three guys unfortunately like a lot of others in Lebanon don't know how to cope and handle themselves like real men after decades of wars and fighting in our beloved country. Add to that, OUR POLITICIANS ARE A BUNCH OF BITCHES THEY PROTECT THE CRIMINALS INSTEAD OF BROKERING A PEACEFUL HANDOVER TO AUTHORITIES. WHAT A SHAME. AND THE POOR PEOPLE PAY FOR IT. THAT'S WHY MOST OF LEBANESE PEOPLE WHO LIVE OVERSEAS AVOID GOING BACK.