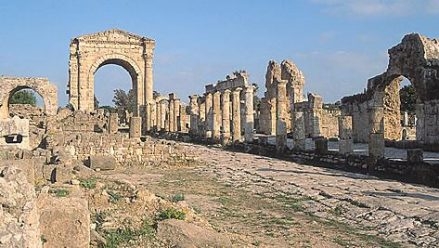 Tyre is a city in the South Governorate of Lebanon. There were approximately 117,000 inhabitants in 2003, however, the government of Lebanon has released only rough estimates of population numbers since 1932, so an accurate statistical accounting is not possible. Tyre juts out from the coast of the Mediterranean and is located about 80 km (50 mi) south of Beirut. The name of the city means "rock" after the rocky formation on which the town was originally built. The adjective for Tyre is Tyrian, and the inhabitants are Tyrians.

Tyre is an ancient Phoenician city and the legendary birthplace of Europa and Elissa (Dido). Today it is the fourth largest city in Lebanon and houses one of the nation's major ports. Tourism is a major industry. The city has a number of ancient sites, including its Roman Hippodrome which was added to UNESCO's list of World Heritage Sites in 1979.

Tyre originally consisted of two distinct urban centers, Tyre itself, which was on an island just off shore, and the associated settlement of Ushu on the adjacent mainland. Alexander the Great connected the island to the mainland coast by constructing a causeway during his siege of the city, demolishing the old city to reuse its cut stone.

In ancient times, the island city of Tyre was heavily fortified (with defensive walls 150 feet (46 m) high) and the mainland settlement, originally called Ushu (later called Palaetyrus, meaning "Old Tyre," by the Greeks) was actually more like a line of suburbs than any one city and was used primarily as a source of water and timber for the main island city. Josephus records that the two fought against each other on occasion, although most of the time they supported one another because they both benefited from the island city's wealth from maritime trade and the mainland area's source of timber, water and burial grounds.

Tyre was founded around 2750 BC according to Herodotus and its name appears on monuments as early as 1300 BC. Philo of Byblos (in Eusebius) quotes the antiquarian authority Sanchuniathon as stating that it was first occupied by Hypsuranius. Sanchuniathon's work is said to be dedicated to "Abibalus king of Berytus"—possibly the Abibaal who was king of Tyre.

There are ten Amarna letters dated 1350 BC from the mayor, Abimilku, written to Akenaten. The subject is often water, wood, and the Habiru overtaking the countryside, of the mainland, and how it affected the island-city.

The commerce of the ancient world was gathered into the warehouses of Tyre. "Tyrian merchants were the first who ventured to navigate the Mediterranean waters; and they founded their colonies on the coasts and neighbouring islands of the Aegean Sea, in Greece, on the northern coast of Africa, at Carthage and other places, in Sicily and Corsica, in Spain at Tartessus, and even beyond the pillars of Hercules at Gadeira (Cádiz)".

The city of Tyre was particularly known for the production of a rare and extraordinarily expensive sort of purple dye, produced from the murex shellfish, known as Tyrian purple. This color was, in many cultures of ancient times, reserved for the use of royalty, or at least nobility.

It was often attacked by Egypt, besieged by Shalmaneser V, who was assisted by the Phoenicians of the mainland, for five years, and by Nebuchadnezzar (586–573 BC). Ezekiel 26:2–14 warned that the Hebrew God Yahweh would cause Nebuchadnezzar to utterly destroy Tyre because its residents gloated over the fall of Jerusalem. The Tyrians held off Nebuchadnezzar's siege for thirteen years, resupplying the walled island city through its two harbours. The siege ended when Tyre agreed to pay a tribute.

Later, a king of Cyprus took Tyre using his fleet in the 370s BC, "a remarkable success about which little is known," according to historian Robin Lane Fox.

In 332 BC, the city was conquered by Alexander the Great, after a siege of seven months in which he built the causeway from the mainland to within a hundred meters of the island, where the sea floor sloped abruptly downwards. The presence of the causeway affected local sea currents causing sediment accumulation, which made the land connection permanent to this day and transformed the erstwhile Tyre island into a peninsula.

Tyre continued to maintain much of its commercial importance until the Christian era.

In 315 BC, Alexander's former general Antigonus began his own siege of Tyre, taking the city a year later.

In 126 BC, Tyre regained its independence (from the Seleucids) and was allowed to keep much of its independence, as a "civitas foederata", when the area became a Roman province in 64 BC.

It is stated in the Bible that Jesus visited the "coasts" of Tyre and Sidon and healed a Gentile (Matthew 15:21; Mark 7:24) and from this region many came forth to hear him preaching (Mark 3:8; Gospel of Luke 6:17, Matthew 11:21–23). A congregation was founded here soon after the death of Saint Stephen, and Paul of Tarsus, on his return from his third missionary journey, spent a week in conversation with the disciples there. According to Irenaeus of Lyons in Adversus Haereses, the female companion of Simon Magus came from here.

After a first failed siege in 1111, it was captured by the Crusaders in 1124, becoming one of the most important cities of the Kingdom of Jerusalem. It was part of the royal domain, although there were also autonomous trading colonies there for the Italian merchant cities. The city was the site of the archbishop of Tyre, a suffragan of the Latin Patriarch of Jerusalem; its archbishops often acceded to the Patriarchate. The most notable of the Latin archbishops was the historian William of Tyre.

After the reconquest of Acre by King Richard on July 12, 1191, the seat of the kingdom moved there, but coronations were held in Tyre. In the 13th century, Tyre was separated from the royal domain as a separate crusader lordship. In 1291, it was retaken by the Mameluks which then was followed by Ottoman rule before the modern state of Lebanon was declared in 1920.

A large sign which marks the ancient city of Tyre as protected cultural property according to the 1954 Hague Convention for the Protection of Cultural Property in the Event of Armed Conflict.

The present-day city of Tyre covers a large part of the original island and has expanded onto and covers most of the causeway, which had increased greatly in width over the centuries because of extensive silt depositions on either side. The part of the original island that is not covered by the modern city of Tyre consists mostly of an archaeological site showcasing remains of the city from ancient times.

Tyre was badly damaged in the late 1970s (Operation Litani) and early 1980s (1982 Lebanon War) during the war between Israel and the Palestine Liberation Organization (PLO). The city was used as a base by the PLO, and was nearly destroyed by Israeli artillery. After Israel's 1982 invasion of southern Lebanon, the city was the site of an Israeli military post. In late 1982, and again on November 1983, buildings housing Israeli headquarters were destroyed by bombs, causing dozens of deaths in both cases and known in Israel as the First and Second Tyre Catastrophes. The 1983 explosion, by a suicide truck, happened only 10 days after similar car bombs exploded in the US Marines and French paratroop barracks in Beirut. Israel and the US blame Iran and Hezbollah for all explosions, but they have denied any involvement.