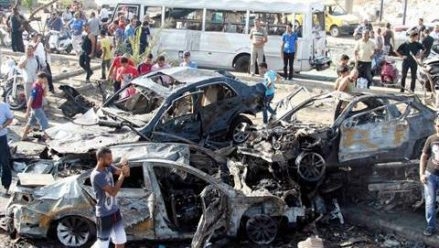 TRIPOLI, Lebanon: The death toll from twin car bombs in the northern city of Tripoli rose to 47 Saturday, as a suspect linked to the blasts was arrested overnight.

Sheikh Ahmad Gharib, 40, was arrested in his residence in Minyeh overnight Friday, north of Tripoli. Arms, explosives and maps of the northern city were seized at his home, judicial sources said.

The sources said that Gharib was an affiliate to the Syrian regime-backed Baath Party and had recently paid several visits to Syria. Gharib was studying Islam in Syria but then quit and became a staunch supporter of the Assad regime.

Investigations into the explosions outside two Sunni Muslim mosques carried on as military experts inspected the blast scenes to identify the cars used in the large bombings outside the Al-Salam Mosque on Tripoli’s Maarad Street and the A-Taqwa Mosque near Abu Ali roundabout.

The sources said that the explosive used outside the Al-Salam Mosque weighed around 175 kilograms. They added that the car used in the blast was a Ford and that investigators are still trying to determine if the other car bomb was a Jeep or a pickup.

Security sources said that 47 people were killed in the attacks and about 300 people who were wounded in the bomb blasts Friday were still hospitalized while others who had mild wounds have returned to their homes.

Funerals started across the northern city and families in neighborhoods of Abi Samra, Bab al-Ramel, Qibbeh, Mina and other streets were preparing to lay the victims to rest.

The situation in Tripoli early Saturday was calm but many shops were closed and traffic in the northern city was very slow.

The incident that sparked fears of sectarian strife continued to draw political condemnation as the United Nations and Iran denounced the blasts.

United Nations Secretary-General Ban Ki-moon and the Security Council condemned the two bomb explosions and urged that those responsible be brought to justice.

“The Secretary-General calls on all Lebanese to exercise restraint, to remain united... in maintaining calm and order in Tripoli and throughout the country, and in preventing the recurrence of such destructive actions,” Ban said in a statement made by his spokesperson.

In its statement, the Security Council condemned the attacks as “acts of terrorism,” and reiterated the need to combat such acts in accordance with the Charter of the United Nations and all obligations under international law.

The 15-member Council also appealed to all Lebanese people to “preserve national unity in the face of attempts to undermine the country’s stability”.

According to the Iranian state agency, Araqchi said, “Undoubtedly, dirty hands of the Zionists have come out from the sleeve of irresponsible Takfiri and radical groups who intend to sow seeds of sedition, damage national unity and peaceful co-existence of different Lebanese ethnic groups, especially Islamic sects.”