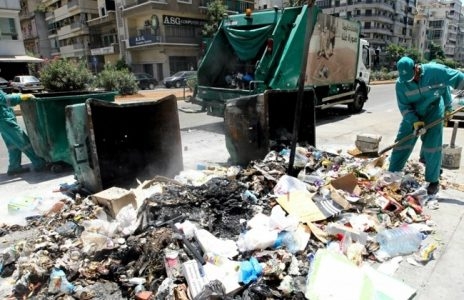 BEIRUT: Relieved residents celebrated as garbage collectors resumed their work in Beirut Sunday, a week after services were suspended following the closure of the Naameh landfill. But Choufresidents refused to let in garbage trucks from the capital, raising doubts about whether Sukleen, the waste management contractor for Beirut and Mount Lebanon, would be able to complete its collection.

And trucks dumped trash on the international road near Tripoli Saturday night, pointing to illegal activity.

Officials are not revealing how they are disposing the capital’s trash, and the Naameh landfill remains closed. Rumors that trucks were dumping trash in Iqlim al-Kharoub prompted hundreds of agitated residents to block the coastal highway near Jiyyeh Sunday with boulders, locking up traffic for kilometers. By the evening, the road was still closed.

Beirut Mayor Bilal Hamad told The Daily Star it would take “a few days” to clear the estimated 3,500 tons of trash on the streets, but warned, in light of the demonstrations, that city residents would have to “wait and see.”

Interior Minister Nouhad Machnouk Sunday sought to reassure Iqlim al-Kharoub residents at a news conference after meeting with a delegation from the region’s municipality union. “No trash will be sent to the region without the approval of its people,” he said.

The president of the Union of Iqlim al-Kharoub municipalities admonished demonstrators for closing the highway. “This international road is for the public and has nothing to do with the waste crisis. We won’t accept anyone blocking it off, for any reason,” Mohammad Mansour said at the same news conference.

Consultations between the Interior Ministry and the union of municipalities will continue Monday.

Comments made by Agricultural Minister Akram Chehayeb, an MP from Aley, indicated there was room for an agreement to send trash to the Chouf. “Beirut is the mother of all of us. We must lighten the burden on our capital city, which belongs to all of us,” Chehayeb said.

But demonstrators were furious. “In the name of all our people, in all our various sects and affiliations, we reject this decision to turn Iqlim al-Kharoub into an environmental and health hazard zone,” one said, practically shouting, to MTV. They remained blocking the highway after the news conference in Beirut.

Four trucks stopped Saturday morning near Jiyyeh were found loaded with garbage, sparking the protest. Locals confiscated the keys and kept the vehicles at Barja.

One demonstrator told The Daily Star he had heard the government planned to open a garbage sorting facility on a Hariri-owned plot of land near the village of Debiyeh.

He asked for anonymity to protect his source. From Debiyeh, the refuse would be sent to a Jumblatt-owned quarry in Sibleen, he said.

Sukleen suspended garbage collection in Beirut and Mount Lebanon last Sunday, after the government closed its primary landfill in Naameh without identifying new dumping sites. The fill, which was originally commissioned to close in 2004, had accumulated over 15 million tons of garbage, several times more than its intended capacity of just 2 million.

Piles of uncollected trash sprouted around the capital and Mount Lebanon, quickly devouring street corners and sidewalks, and suffocating residents with their stench. Beirutis were still burning mounds Sunday, despite warnings from the Fire Department that the resulting air pollution is far more toxic than the smell of trash itself.

“They had to choose between bad and worse,” said Ali Darwish, president of Green Line Association, an environmental NGO. “Municipalities are trying to take a practical decision. You cannot leave the streets blocked. People are incinerating in the streets. You will see the city burn. It will drown in smoke and smog.”

Environmentalists are urging officials to take advantage of the crisis to start composting and recycling. “Municipalities should tell people that no trash will be collected unless it is sorted at home between organic and inorganic,” Darwish said.

Recyclers will buy most of the inorganic garbage, he said, cutting by half the volume left on streets. And municipalities can buy composting machines to cycle the organic waste, starting operations within two weeks.

Without a waste management plan in effect, some trucks appeared to be dumping illegally. Two dumped their trash in the middle of the international highway near Chekka, in the qada of Koura, overnight Saturday, according to the president of the nearby municipality of Kefraya.

“We had to move the trash to our dump using our pickup trucks,”Youssef Samrout said.

Once there, they sifted through the contents to see where it was from. They were astonished with what they found.

“Unfortunately, unfortunately,” Samrout said gravely, “what was inside was medical waste.

“Imagine, finding drip bags with IV lines still attached – the ones that you stick in the patient’s arm,” his voice rising, “and they were contaminated with blood.”

Police impounded a truck and arrested its driver, who was suspected of committing the crime.

The documents municipal workers found in the trash showed it had been collected from Rabieh and Mansourieh, both in Mount Lebanon.

Separately, a photograph circulating on Facebook showed a massive truck pouring garbage down a slope near Beit Mery, off the side of a mountain road.

Hundreds of demonstrators gathered near Beirut’s Grand Serail Saturday, rejecting government plans to open new landfills and incinerators, and demanding composting and recycling. They also called on Environment Minister Mohammad Machnouk to resign. At times, the crowd chanted, “The people demand the fall of the regime!”