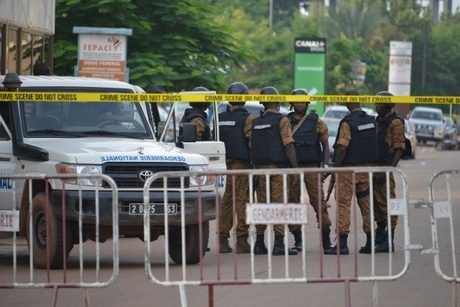 Three Lebanese nationals were among the victims of the terrorist attack that targeted a Turkish restaurant in Burkina Faso on Monday and left 18 individuals dead, Lebanon's authorities said.

Lebanon's Foreign Ministry identified in a statement the victims as Ahmed al-Beli, Mohsen Fneish and his Canadian wife who was pregnant at the time.

The three were killed in a counter-assault between the terrorists and the security forces in Borkina Faso.

In its statement, the Foreign Ministry confirmed that "it is following up, with the authorities in Burkina Faso, the necessary procedures for transporting the bodies to Lebanon.”

Eighteen people, including at least eight foreigners were shot dead in a Turkish restaurant in Burkina Faso on Monday, in the latest attack in West Africa to target a spot popular with expatriates.

There has been no claim of responsibility for Sunday night's attack at the Aziz Istanbul restaurant, which was often packed with foreign nationals who went there to watch football.

Two attackers were killed by security forces in a counter-assault that left the streets echoing with gunfire until morning. Five members of the security forces were among 22 people wounded, prosecutor Maiza Sereme said.

Three others have yet to be identified, Sereme said.

"They started shooting on the terrace. We climbed up the stairs and lay on the ground. The attackers came and pointed their guns at us," said one survivor, interviewed in hospital on national television.

"I didn't understand their language, it might have been Arabic."

The restaurant is just 200 meters (yards) from a hotel and cafe targeted in an assault in January 2016 that left 30 people dead and 71 wounded, many of them foreigners. That attack was claimed by al-Qaida in the Islamic Maghreb (AQIM).

"They arrived at the scene of the crime on a motorbike," she told a press conference. "Each of the terrorists was armed with an AK47. We found many cartridge clips at the scene, some of them empty and some of them still full."

Forty people were freed in the counter-assault by security forces, she said.

At nightfall on Monday, a crowd of about a hundred gathered behind barricades about 300 metres from the restaurant, whose windows were smashed and whose ochre two-storey front showed signs of a gunfight.

"I feel deeply moved, it's something that goes right to the heart," said Yacouba Rabo, a 28-year-old physical education student.

"These are human beings who have been mown down."

Jean Bosco Bossou, a 23-year-old student, said, "The forces of evil have struck. Our people are above this -- we will always meet the challenge."

- 'Despicable' -President Roch Marc Christian Kabore condemned the shooting as "a despicable attack that has Ouagadougou in mourning".

The attack is the latest in the region targeting spots popular with foreigners and locals alike.

Last year's assault on the Splendid hotel and Cappuccino restaurant, down the road from the Aziz Istanbul, came after jihadists claimed an attack on a hotel in the capital of neighbouring Mali that killed 20 people.

And in March last year 19 people were killed when gunmen stormed the Ivory Coast beach resort of Grand-Bassam, an attack also claimed by AQIM.

In Burkina Faso, a dozen soldiers were killed in December in an assault on a base in the north of the country.

An Australian and a Romanian, abducted in Burkina Faso in 2015, are still being held hostage by Qaeda-affiliated Islamists.

Sean Smith, senior Africa analyst at risk consultancy Verisk Maplecroft, said the restaurant attack "illustrates that the threat of terrorism now looms over most of the Sahel region".

"While most attacks in Burkina Faso remain confined to the remote northern regions that border Mali, this incident reiterates that Islamists also have the ability to strike at will in the capital."

- Calls to back anti-terror force -French President Emmanuel Macron spoke with Kabore, his office said, condemning the "terrorist attack" in the former French colony and stressing the "urgent need" to speed up the launch of a five-country anti-jihadist force in the Sahel.

France has its own Barkhane anti-jihadist operation in the region and has been pushing efforts to set up the 5,000-member force, manned by Chad, Niger, Mali, Burkina Faso and Mauritania, by October.

African Union chief Alpha Conde said the attack "shows the importance of bringing the force into operation" and called on the European Union to find the estimated 400 million euros ($471 million) of extra funding needed.