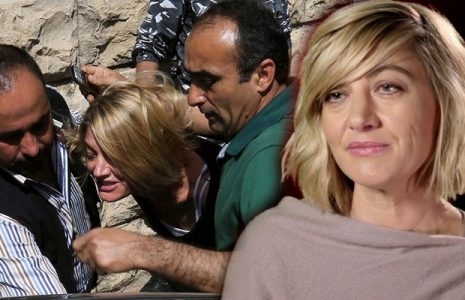 Signs of a potential breakthrough have emerged in the Beirut child abduction saga involving a Brisbane mother and 60 Minutes TV crew.

Sally Faulkner's lawyer Ghassan Moughabghab told AAP an agreement has been negotiated between Faulkner and her estranged husband, Lebanese-American Ali Elamine, in which she gives up custody of the two children in return for her release.

"We will see when we get in front of the judge today ... hopefully both parties will sign the agreement in the presence of the judge," Mr Moughabghab said on Wednesday.

Faulkner and 60 Minutes reporter Tara Brown are due to reappear before a judge in Beirut on Wednesday night, Australian time.

When Moghabghab was asked whether the deal involved a payment to Elamine, he replied: "For my part it does not involve money, I don't know about the other party (the Nine Network)."

Faulkner and and 60 Minutes journalist Tara Brown are due to reappear before a judge in a Beirut court on Wednesday night, Australian time.

It is unclear whether Brown's colleagues, Benjamin Williamson, David Ballment and Stephen Rice, will also be called into court.

The lawyer acting for the Nine Network, Kamal Aboudaher, on Monday said the broadcaster hadn't offered any financial compensation to Elamine.

"We didn't exchange any offer with Ali regarding funds," he said.

Joe Karam, lawyer for Adam Whittington, who is alleged to have headed up the child recovery operation, also confirmed there had been "developments" in the case.

"We hope that justice will find its way ... and that they will get released or released on bail, because locking them up for two weeks is too much," Karam told AAP.

Faulkner, Brown and her colleagues were arrested two weeks ago after a child recovery team seized Faulkner's children, Lahela, 6, and Noah, 4, from a Beirut Street as they were walking with their Lebanese grandmother.

Along with Faulkner, they have been in jail in Beirut ever since.

They are facing charges of kidnapping and being members of a criminal gang, which can attract maximum sentences of up to three years and 10 years respectively.