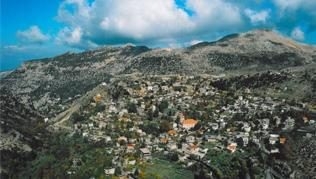 Tannourine is a Lebanese municipality located in the Batroun District, part of the Mohafazah of North-Lebanon, 75 km from the capital Beirut.

Tannourine is the plural of the Syriac word Tannour. A Tannour is an old stone oven used in ancient times. The very first settlers established a number of Tannours in Tannourine-Al-Fawqa, and later settled down the valley in Tannourine-Al-Tahta, where a more fertile landscape allowed local agriculture to thrive.

Tannourine lies in a collection of valleys and ravines accessible either from Douma, a backroad from Bsharri or from a newly constructed highway direct from Batroun.

The village also shares its name with a cedar forest of some 60,000 trees, making it the 2nd largest cedar reserve in Lebanon. The landscape overlooking the historic valley of Ain-Al-Raha is ideal for the culture of cedars, which grow in abundance. These cedars can be seen along the road that goes north to Hadath al-Jebbeh, which, although in poor condition, winds its way through wild and isolated scenery up to the Kadisha Valley gorge, leading to Bsharri.

Other companion trees like Cupressus, Pinus, Abies, Populus and others constitute a very rich ecosystem in planter species. The fauna described as being present in this type of unique ecosystem range from the various types of birds (eagles, owls, robins, etc...) to wild animals (hyenas, boars, squirrels, snakes and bats).

The Village of Balaa (bordering Laqlouq) is known for its deep natural sink hole. A 300 meter walk brings you to a dizzying open cavern some 250 meters deep. Three natural bridges - of which the middle one is the most spectacular - complete the scene. In the spring, snow melt water forms a scenic 90m high waterfall.

The Nahr-Al-Joze (the Joze being a species of trout that grows in the valley river) serpents through the valley and borders a number of Lebanese Restaurants, and creates a jungle-like ecosystem higher up towards the source. Likewise, the river has formed a number of natural pools of stagnant clear water that can be explored higher up towards the source.

Tannourine is well known for its ancient Maronite monasteries; specifically the convents of Saint Shallitah and Saint Antonios Houb, the latter being located in the village of Wata Houb.

Also, among the rocky outcrops of Tannourine-Al-Tahta is located an ancient 500-year-old Lebanese house, believed to be one of the earliest examples of Lebanese architecture. That same house was on the cover of a National Geographic report on Lebanon. Until late 2008, the occupant of the house was the oldest living man in Lebanon. Dubbed "Massoud", he was reputed to be 109 years old.

In the valley of Tannourine-Al-Tahta lies a nearly-intact Roman aqueduct and a decrepit reservoir and Roman Cistern at its side. It is a testament that the fertility of that valley was being exploited since at least the 1st century AD

Higher up in the mountains, in the now abandoned village of Ain-Al-Raha, are found a number of 6th century and Crusader-era churches that many scholars believe to be one of the earliest known proofs of the presence of Christianity in the upper Levant. Indeed, according to the legend, Ain-Al-Raha (literally: source of relief) was during the 11th to 13th century a safe haven for defeated crusaders.

Also, above the previously mentioned old Lebanese house is an abandoned monastery sheltered in the hollow cave on the face of the mountain. It is believed that the 16th century remains were constructed in a way that it melded into the mountain to create a "camouflage" of sorts; and indeed unless you intend to search for it, you'd be hard-pressed to locate it immediately. Such caution was employed in order to thwart Ottoman invaders who wished to seize the Levant, which they eventually succeeded in doing.

The newly constructed Tannourine Municipality building is located in Tannourine-Al-Fawqa, overlooking the town previously mentioned. A President of the Municipal Council is elected every 6 years along with a "list" of 18 cabinet members who are all subjected to a vote by the residents. Its has a relative administrative and financial independence but remains under the control, supervision and financing of the central government.

Boutros Harb - Member of the Parliament and current Minister of Labor.