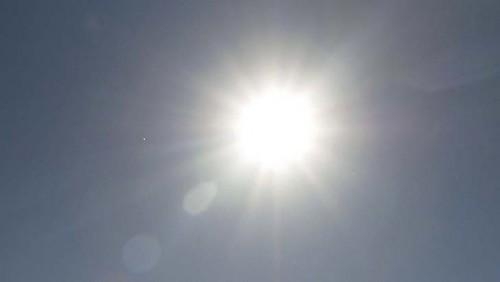 Sydney is sweltering through its second hottest day on record, with the mercury hitting 45.2 degrees in the city just before 2pm.

Weatherzone said on Friday afternoon the city could surpass its hottest ever day of 45.3 degrees, recorded at Observatory Hill in January 1939.

Many parts of NSW were hovering around 45 degrees at lunchtime on Friday as a fiery air mass from inland Australia moved over the state, pushing the mercury well above the forecast maximum.

In Sydney, the original forecast was that the temperature would reach a maximum of 39 degrees in the city but by 12.30pm the mercury already had reached a stifling 43.3 degrees at Observatory Hill, climbing to 45 degrees at 1.43pm and then 45.2 degrees at 1.58pm. The west was even hotter, with Penrith hitting 45.9 degrees at 2.15pm. Sydney Airport hit 45.9 degrees at 2.07pm.

Just after midday at Wilcannia Airport in the state's west, the temeprature hit a scorching 44.9 degrees. Not far behind it were Albion Park, in the Illawarra, and Condobolin in the central west, which both registered 44.8 degrees just after midday.

Weatherzone meteorologist Ben Domensino said this was the second day this month the city had sweated through temperatures over 40 degrees.

That only had happened four times in January in the past 107 years.

"Sydneysiders may find this type of heat unusual," he said.

"Last summer only saw the mercury reach a top of 33.4 degrees, and [the city] recorded just two days over 30. On average, the city typically reaches 40 degrees once every three summers, although this year has seen an unusually hot start.

"Reduced cloud cover over central and western Australia during the past few weeks has allowed a very hot air mass to build. This heat has periodically made its way towards the nation's coast due to the passage of low pressure troughs across the nation's south."

Thousands of revellers at the Big Day Out at the Sydney Showground have been warned to drink plenty of water and wear protective clothing and sunscreen throughout the day, while misting stations are on site to cool down partygoers.

The heat was expected to peak in the low 40s around Coonabarabran, where firefighters are battling a 46,000-hectare bushfire that has destroyed 51 properties since it ignited last weekend. A total fire ban has been declared for Friday.

At midday on Friday the fire was burning in the Bugaldie area, one kilometre south of Bugaldie village, and eight kilometres west of Coonabarabran.

The Newell Highway has been closed in both directions near Gowang between Gilgandra and Mendooran Road in Warkton.

An emergency alert telephone message has been sent to residents in the area, and residents have been advised to follow their bushfire survival plans and monitor conditions.

"The fire is burning close to rural properties in the Bingie Grumble Road, Cenncruich Road, O'Connors Road, Gowang Road and Tannabah Road areas. People in these areas must remain vigilant and stay up to date with the changing fire conditions," the Rural Fire Service said in a statement.

Weatherzone meteorologist Ben McBurney said the heat was likely to linger over that region into Saturday.

"It's not going to be as hot on Saturday, probably in the high 30s, but still not very useful for the fires over there," he said.

Mr McBurney said a cool change was expected to sweep over Sydney about 8pm on Friday, bringing a rapid drop in temperature and creating cooler sleeping conditions.

The change would be accompanied by the chance of showers and thunderstorms late in the evening.

"This looks like the last burst of heat that's going to come through from this build up of heat over the interior," Mr McBurney said.

"The cool change is going to bring quite a sharp drop in temperature, and winds are going to turn onshore over the weekend and this brings the risk of a few showers. Not very heavy, just a few light showers across the weekend. It's going to keep temperatures down in the mid-20s."