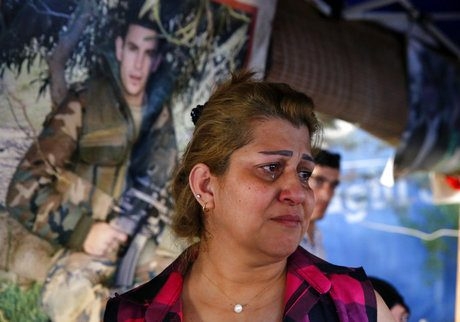 The remains of eight Lebanese soldiers kidnapped by the Islamic State group three years ago were located Sunday, a senior Lebanese official said, in a negotiated deal that followed a military offensive to drive the militants out of the border area with Syria.

Major General Abbas Ibrahim, the chief of Lebanese General Security, said seven bodies buried in Lebanon near the border with Syria were removed while the body of slain soldier Abbas Medlej was yet to be located. He said the fate of a ninth soldier remained unknown amid reports that he had defected to the Islamic State group.

The soldiers' remains were transported later Sunday to Beirut's military hospital for DNA tests to determine their identities.

Locating the soldiers' remains was part of a deal that comes a week after the Lebanese military launched a campaign to drive out IS militants from some 120 square kilometers (46 square miles) in a rugged mountainous area that straddles the Lebanese-Syrian border. Separately but simultaneously, Lebanon's Hizbullah group, in cooperation with the Syrian army, launched another offensive to pressure the IS militants in Syrian territories along the same border area.

The U.S.-backed Lebanese army denies it coordinated with the Syrian government.

The deal also entails the transfer of remaining IS militants on both sides of the border to eastern Syria's Deir Ezzor province, which is mostly controlled by the extremist group. Other media reports however said that the militants want to go to areas under the regime's control to benefit from reconciliation agreements and avoid any IS retribution over their surrender. The Syrian government, backed by Russian air power and Iranian-organized militias, is preparing an offensive to recapture oil-rich Deir Ezzor.

After a week of fighting, cease-fires were announced on both sides of the border on Sunday. The Lebanese army said the halt in fighting, which came after 100 square kilometers (38 square kilometers) were cleared of militants, was to allow for negotiations to determine the fate of the soldiers.

Hizbullah and Syrian media said the cease-fire was to allow for the comprehensive deal.

Hizbullah has been fighting alongside President Bashar Assad's forces inside Syria since 2013.

Lebanon's main political factions are bitterly divided over the war in neighboring Syria, and many would fiercely object to any direct cooperation with Assad's government. Lebanese were also divided over the outcome of the deal, some taking to social media to criticize the negotiations with the militants. Others hailed the deal and evacuation of the militants as a victory.

Ibrahim said after IS militants were driven into Syria under pressure from the Lebanese military, the deal became possible. He said detained militants revealed the location of the soldiers' remains. They were still wearing their military uniforms, he said.

Ibrahim said he was part of the negotiations over the fate of the soldiers, but Hizbullah and Syria sorted out the larger deal.

"The first article in this deal was (determining) the fate of the soldiers," Ibrahim told reporters from outside the tents set up for years by the families of the missing soldiers looking for their relatives. "This case ... has regrettably been closed on a dark note." Relatives of the soldiers broke down in tears and declined to talk to the media.

The soldiers were among more than 20 kidnapped in 2014 when militants linked to al-Qaida and IS overran the border town, Arsal. Most of those kidnapped were later released. It was the most serious spillover into Lebanon from the six-year Syrian war. Al-Qaida-linked militants were evacuated from the area earlier this month, following a Hizbullah offensive there.

The Central Military Media, an outlet run jointly by Hizbullah and the Syrian army, said according to the cease-fire deal, buses will transport IS members and their families to Boukamal, the Syrian town in Deir el-Zour, along the Iraqi border.

Media reports said Monday that buses were arriving in Syria's Qalamun region to evacuate the militants.

The bodies of five Hizbullah fighters were also brought back to Lebanon as part of the deal.