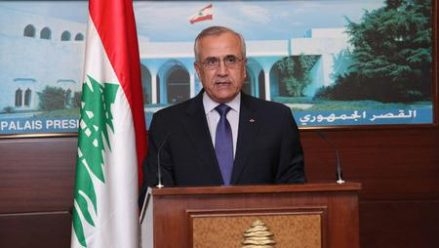 President Michel Suleiman assured on Sunday that the army is “fully authorized” to strike the attackers in the latest clashes between the gunmen of Salafist cleric Sheikh Ahmed al-Asir and the army’s forces in the southern city of Sidon.

“The military institution is granted the full authorization to hit the attackers and arrest the perpetrators and the instigators and bring them to justice,” Suleiman said on Twitter.

He explained: “This is in order to preserve the security of the Lebanese and the dignity and image of the army.”

In a released statement, the president also slammed calls for troops to defect from their units.

“Joining jihad against the army only serves the interests of Lebanon's enemies, he stated.

“These calls will not be heeded by Lebanese and Palestinian citizens or army troops.”

Suleiman called for a security meeting to be held on Monday in Baabda Palace.

He had discussed the situation in Sidon in phone conversations with caretaker Interior Minister Marwan Charbel and Army chief General Jean Qahwaji.

Ten army troops were martyred and 35 others were wounded Sunday in a clash with supporters of al-Asir in the Sidon suburb of Abra, the Army Command said in a statement.

The fighting erupted when Asir supporters surrounded an army checkpoint in Abra, where a vehicle transporting other supporters of the cleric had been stopped, a security source told Agence France Presse.