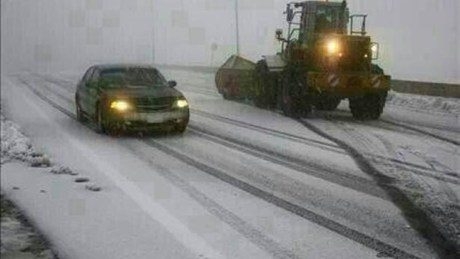 A powerful storm wreaked further havoc across the country on Tuesday, causing a fatality and major material damage and forcing the closure of all public and private schools and vocational institutes.

In the South, a young man in his twenties, Osama Jomaa, was killed after his pickup truck flipped over in the vicinity of the al-Zahrani River. According to the National News Agency he hailed from the town of Houmine al-Fawqa.

Heavy rains meanwhile closed the entrances of the coastal southern city of Tyre overnight, damaging crops and forcing the shutdown of the city's port.

A load-bearing wall meanwhile partially collapsed onto a road in the Sidon town of Bqusta.

Elsewhere, the Civil Defense announced that it had rescued several citizens who were stranded in three cars on the al-Sahha road in Hammana, Mount Lebanon. They were eventually allowed to continue their trips.

In the Northern region of Koura, Civil Defense crews pumped out flood water from a number of shops and restaurants on Amioun's highway.

Flash floods meanwhile turned the Akkar Plain area, especially between the al-Kabir and al-Ostwan rivers, into a "large lake" with the overflowing of the rivers towards properties, agricultural fields and homes in several towns in the area. Crops were completely destroyed as the flooding forced some families to flee to safer locations, NNA said.

A large piece of glass from a balcony meanwhile landed on a car in the Beirut area of Karakoul al-Druze, causing material damage.

Moreover, the Lebanese Red Cross rescued four citizens stranded in snow in the high mountains of Tasheh in Akkar's Qamoua.

It also reported 581 medical emergencies, 703 evacuations and the distribution of 95 blood units.

Other damages were also reported across the country.