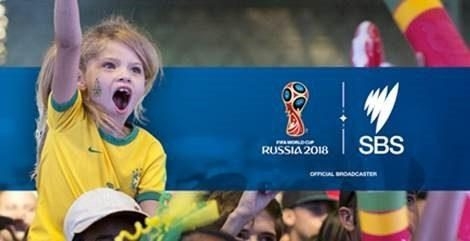 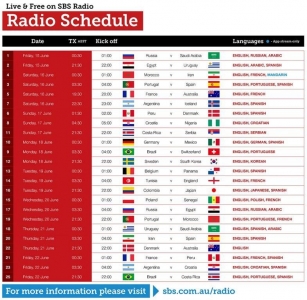 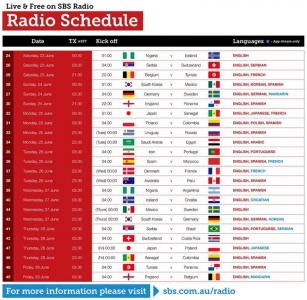 SBS Director of Audio and Language Content, Mandi Wicks, said: “SBS is truly passionate about football, a multicultural celebration that unites Australia’s diverse communities. With the aim of engaging more Australians, SBS Radio is providing the most multilingual coverage of the 2018 FIFA World Cup™, broadcasting in at least 13 languages including Arabic, Korean, French, German, Spanish, and Portuguese. Our multilingual coverage is being produced in partnership with the best sports media from around the world.”

Direct from Red Square, SBS Radio’s The World Game podcast with Lucy Zelic, will deliver audiences a football fix of highlights every morning, with previews, behind the scenes buzz and key moments from each night’s matches.

Celebrating Australia’s passion for football, SBS Radio’s broadcasters will join events across Sydney and Melbourne, as communities including Arabic, French, German, Spanish and Portuguese, get together with friends and family to share the experience of the 2018 FIFA World Cup™ live.

For further details on how to listen to the 2018 FIFA World Cup™ live on SBS Radio in multiple languages, click here

Download the free SBS Radio App now for iOS and Android, with the 2018 FIFA World Cup™ app available from 11 June.

In addition to the comprehensive radio coverage across language programs, SBS TV will present the match of the day, every day of the 2018 FIFA World Cup™ live, free and in HD for all Australians along with daily highlights and analysis of all 64 matches on television and online.

The SBS match of the day will be replayed each morning at 6.30am, free and in HD on SBS, and FIFA classic matches will air on Saturday and Sunday afternoons throughout the month.

SBS is presenting the 2018 FIFA World Cup Russia™ in partnership with Optus Sport. Visit The World Game for details on how to watch every match when competition kicks off on 14 June.

*The FIFA World Cup is the most widely followed and watched sporting event in the world, with Brazil 2014 generating more social media conversation than the Superbowl, Oscars, and Winter Olympics of the same year combined. https://edition.cnn.com/2014/07/14/tech/social-media/world-cup-social-media/index.html

The world's most linguistically diverse public broadcaster, SBS Radio epitomises the voice of multicultural Australia, engaging with the millions of Australians who speak a language other than English at home with Australian-focussed news and information in their language. Available across many platforms including AM and FM radio; digitally through a range of platforms and devices and on the free mobile app, SBS Radio provides services in 68 language programs and has four 24/7 digital only radio stations: SBS Arabic24, SBS PopAsia, SBS PopDesi and SBS Chill.

A former Socceroo goalkeeper, Clint has won two A-League championships with Sydney FC. More recently he has become a expert voice in the media appearing on different channels including SBS The World Game, SBS Radio and many others.

Former Matilda player, Kathryn was named the Asian player of the year in 2010. As a striker she has played 83 times and scored 40 goals for the Matildas. Recently she was named the Deputy Chief Executive at Professional Footballers Australia (PFA).

Current player for Melbourne City in the A-League, Scott previously played for Adelaide United, Sydney FC, Western Sydney Wanderers and Perth Glory. His international career took him to clubs in the English Premier league and in the Swedish league. Scott also represented Australia at U17 level and with the Socceroos.