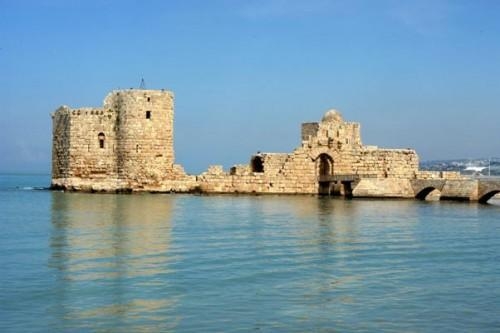 Saida, a city swimming in history

SAIDA (SIDON, SAIDON) is said to mean "fishing", and even today fishermen moor their boats in the small picturesque port. Sidon was the third great Phoenician city-state, rivaling Byblos and Tyre as a naval power. In Darius' time, towards the end of the 6th century B.C., it was the capital of the fifth Persian satrapy and a showplace of buildings and gardens. The town was conquered by the Crusaders after a famous siege lasting 47 days, then retaken by Saladin 70 years later.
Sidon is known as the capital of the South. It is surrounded by beautiful orchards of oranges, lemon, banana and loquat trees. The city's northern harbor is graced by Castle of the Sea, erected in the early 13th Century by the crusading Knights of St. John of the Hospital of Jerusalem on an islet at the mouth of the harbor.

The shell of the Castle of St. Louis sits atop the Phoenician acropolis near Murex Hill, so named after the Murex shell from which the famous Phoenician purple dye was extracted. In the old town more recent buildings worth a visit are Khan as-Sabun, Khan el-Franj and the Great Mosque above the Egyptian Harbor which still retains the 13th Century walls of the fortress Church of the Hospitallers of St. John.

There is evidence that Sidon was inhabited as long ago as 4000 B.C., and perhaps as early as Neolithic times (6000 - 4000 B.C.).The ancient city was built on a promontory facing an island, which sheltered its fleet from storms and served as a refuge during military incursions from the interior. In its wealth, commercial initiative, and religious significance, Sidon is said to have surpassed all other Phoenician city states

Sidon's Phoenician period began in the 12th - 10th century B.C. and reached its height during the Persian Empire (550 - 330 B.C.). The city provided Persia, a great land power, with the ships and seamen  to fight the Egyptians and the Greek, a role that gave it a highly favored position. The Persians maintained a royal park in Sidon and it was during this time that the temple of Eshmoun was built.

Glass manufacture, Sidon's most important enterprise in the Phoenician era, was conducted on a vast scale and the production of purple dye was almost as important. The small shell of the Murex trunculus was broken in order to extract the pigment that was so rare it became the mark of royalty.

Like other Phoenician city states, Sidon suffered from a succession of conquerors. At the end of the Persian era in 351 B.C., unable to resist the superior forces of Artaxerxes III, the desperate Sidonians locked their gates and set fire to their city rather than to submit to the invader. More than 40,000 died in the conflagration.

After the disaster the city was too weak to oppose the triumphal march of Alexander the Great in 333 B.C. It sued for peace and the Hellenistic age of Sidon began.

When Sidon, like the other cities of Phoenicia, fell  under Roman domination, it continued to mint its own silver coins. The Romans also built a theater and other major monuments in the city. During the Byzantine period when the great earthquake of 551 A.D. destroyed most of the cities of Phoenicia, Beirut's school of Law took refuge in Sidon.

The town continued quietly for the next century, until it was conquered by the Moslems in 636.

In 1111 Sidon was besieged and stormed by the Crusader Baldwin, who was soon to become King of Jerusalem. Under Frankish rule, the city became the chief town of the Seigniory of Sagette and the second and the four baronies of the Kingdom of Jerusalem.

Jerusalem surrendered to Saladin in 1187, but it was re-occupied for a hundred years when the Crusader Templars recaptured it briefly. They abandoned it for good in 1291, after the fall of Acre to the Mamluke forces.

In the 15th century, Sidon was one of the ports of Damascus and it flourished once more during the 17th century when it was rebuilt by Fakhreddine II, then ruler of Lebanon. Under his protection and encouragement, French merchants set up profitable business enterprises in Sidon for trade between France and Syria. By the beginning of the 19th century, however , Sidon was relatively obscure and remained so until the mid-20th century when it developed into an important commercial and agricultural center.