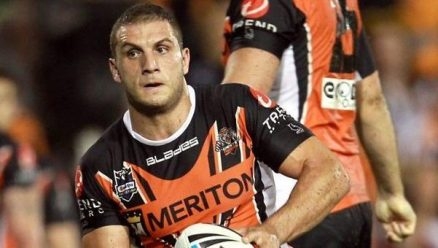 Robert Peter "Robbie" Farah (born 23 January 1984) is an Australian professional rugby league player for the Wests Tigers club in the National Rugby League (NRL) competition. He primarily plays at hooker and can operate as a half-back. Farah is of Lebanese descent.

Farah was educated at St Mel's Primary, Campsie, De La Salle College Ashfield, and the University of Sydney, graduating with a Bachelor of Economics in 2010

A junior with Enfield Federals and Leichhardt Wanderers, Farah made his first-grade debut in 2003, playing four games from the bench. In 2004, his season was marred by a knee re-construction and his first-grade playing time was restricted to three games.

With Wests Tigers hookers Robbie Mears and Darren Senter both retiring at the end of the 2004 season, Farah was the club's main hooker for 2005. Early in the year he would often start on the bench and interchange with Ben Galea. He was the starting hooker in the Wests Tigers 2005 NRL grand final-winning team against the North Queensland Cowboys.

In late 2008, Farah was offered a contract with the Gold Coast Titans commencing from the 2010 season. On 13 January 2009, it was announced that Farah had chosen to re-sign with the Wests Tigers until the end of the 2013 season. At the same time, the club appointed Farah as team captain.

At the 2010 Dally M Awards Farah came second behind Todd Carney by 1 point. He was also named Hooker of the Year.

Making 16 appearances in 2012, Farah surpassed Darren Senter's previous record of 86 games as captain of the Wests Tigers. He was nominated for the Dally M hooker of the year award. With the departure of Chris Heighington at the end of the season, Farah became the most experienced and longest-serving player at the Wests Tigers.

Farah was in the press in September 2012, when he called for harsher penalties for Twitter abusers after receiving a tweet about his recently deceased mother that he described as, "vile." He said, "The laws are piss weak and people should be accountable for their comments." Soon after he issued an apology, when it was revealed that he had earlier tweeted that Australian Prime Minister Julia Gillard should be given, "a noose," for a 50th birthday present.

Early in 2013, Farah signed a new 4-year contract to remain with the Wests Tigers until the end of the 2017 season. He said, "As captain of the club, I see myself as having the responsibility, when things aren't as good as we’d like them to be ... I see it as my challenge to help turn the club around, not to just give up and walk away. You might get cranky at some things, but you've got to ride the good times and the bad times. That’s what it's all about."

As an 18-year-old in 2002, he toured with an Australian Lebanese team, playing France in Tripoli and scoring a try.
Between 2006 and 2012, Farah represented City Origin six times, captaining the team from 2009 onwards.

In August, 2008, Farah was named in the preliminary 46-man Kangaroos squad for the 2008 Rugby League World Cup.

In May 2009, Farah was named at hooker in the 17-man squad to represent New South Wales in the opening State of Origin match on 3 June 2009, in Melbourne. He played in the first two games of the series, but his performances were described as, "underwhelming." Later that year he was named in the Prime Minister's XIII to play Papua New Guinea and Australia's Four-Nations squad.

Farah played in two matches in the 2009 Four Nations. He made his debut for Australia from the bench in the match against England, relieving starting hooker Cameron Smith just before halftime. A week later he played in the starting line-up in the team that beat France 42–4.

In 2010, Farah captained the City Origin side and was named in the Australian squad for the 2010 Four Nations. With first-choice hooker Cameron Smith playing in all matches, Farah made just one appearance, coming off the bench in the "dead-rubber" match against New Zealand. He was again named as second-string hooker in the 2011 Four Nations, but withdrew from the tournament for family reasons before he could make an appearance.

Farah returned to State of Origin football in 2012. In the weeks leading up to the team selection, Farah was contacted by New South Wales coach Ricky Stuart, to explain that his first choice for hooker would be Danny Buderus, who had recently returned to the NRL. Furthermore, assistant coach Steve Roach declared Farah was not, "an Origin type player." After an injury to Buderus, and a man-of-the-match performance in the Country Origin match, Farah was named at hooker for the first match of the series. Despite playing for the losing team, Farah was described as, "one of the Blues' most creative and effective players."

New South Wales won the second match of the series, and Farah was named as the player's player. During the match, Farah handled the ball 101 times and made a record 63 tackles, and missed no tackles. The previous record for most tackles in a State of Origin match was held by Dallas Johnson, who had made 60 in a game in 2007. Unfortunately, soon after, Robbie's mum Sonia died of cancer. Farah was awarded the Brad Fittler Medal for the New South Wales outstanding player of the series, as voted for by his team-mates.