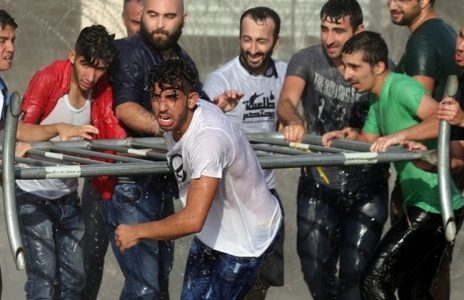 BEIRUT: Police forcibly dispersed Wednesday a small group of demonstrators protesting in Downtown Beirut over the government’s delay in solving the national garbage crisis, as the environment minister announced he would need at least until next Tuesday to award vital waste management contracts. Television footage showed medics removing a protester on a stretcher after police used force to disperse the demonstration. Protesters identified the injured young man as Bilal Allaw, of Hermel, and said he received a severe blow to the head and was foaming at the mouth. Unconfirmed reports said he was taken to the American University of Beirut’s Medical Center.

The protesters threw objects at the police, and the police fired back with water cannons. The demonstrators then used a metal barricade to hook onto a barbed wire barrier to try to pull it down.

The protest was called by the “You Reek” campaign, a popular movement that wants sustainable solutions to the garbage crisis and the environment minister’s resignation.

“The atmosphere is the same in all of Lebanon. We smell the stink of our rubbish politicians, and the rubbish is everywhere. We can’t let them pollute our forests, our water and our dirt,” said Sawsan Jaroudi, 40, from Beirut.

Officials are losing the public’s trust, as waste collection services through Beirut and Mount Lebanon has been interrupted for a month.

Municipalities have been dumping trash in streams and valleys, along highways, and in populated areas. As these rubbish piles catch fire, residents have been choking on the poisonous fumes.

In a telling scene Tuesday night, police in Tripoli stopped two trucks smuggling garbage from Jounieh to the north. Speaking to reporters, Rami Harmoush said the municipality paid him $500 for each load he took, which he dumped on his private property.

But the scenes in the two clips, which were posted on social media, had the air of a citizen’s arrest – a crowd aggressively questioned the two drivers. A police officer was seen walking indifferently behind.

Demonstrators in Beirut, many chanting, “The people want the fall of the regime,” described their cause as a rejection of the entire political class. “This is bigger than an environmental matter. This is an existential one,” said Abdel-Rahman Kreidieh, 25, from Beirut.

“It’s becoming something more. Because of waste, we discovered we have a very low, very bad government, and people who don’t care about their citizens. So it’s normal that because of waste we are pulled into a larger battle,” said Paul Abi Rachid, the head of Lebanon EcoMovement, national coalition of environmental groups.

“I came because it’s the first time I see anyone move on their own, not at the orders of a politician. So I must come and stand with them,” Jaroudi said. “I’m going to join every time.”

Environment Minister Mohammad Machnouk lashed out at activists at a news conference Wednesday, blaming them for exacerbating the crisis. He said authorities need to open a landfill for country’s trash, but demonstrators keep blocking such plans.

“There are stupid people who keep saying that the ministry is seeking to open new dumps. They clearly do not know the difference between a dump and a landfill, which even developed countries use to manage their waste,” Machnouk said.

“Before, we had 760 random dumps around the country and that was bad enough. Today there are more than 2,000 illegal dumps in Lebanon ... This is tragic and the situation cannot go on like this,” he said.

At the moment, it seems that the only place to site a landfill is in Akkar, though MPs there have not signaled their approval yet, while other communities have forced their politicians to reject new landfills in the Chouf and the Metn.

Beirut has been dumping much of its trash in Karantina, by the port, but the lots there are running out of space.

Moreover, a strike called by the Union of Port Workers Wednesday prompted Prime Minister Tammam Salam to promise that the city would no longer dump its trash nearby, leaving the capital with few avenues to maintain its garbage collection services.

The workers launched their strike in the morning after they discovered bulldozers shoveling trash in the Karantina area Tuesday. They said they also discovered evidence that the city was preparing to create a dump north of Charles Helou Avenue.

The striking workers were promptly joined by those from the nearby grain silos, while others working in the area said they would consider joining in solidarity. The rapid developments threatened to cripple the port economy.

They called off their strike after receiving assurances from Salam, but union chief Beshara al Asmar said they would strike again if dumping resumed.

Machnouk was expected to announce the winners of new waste management contracts at his news conference Wednesday, but he instead postponed the date to next week.

The government missed the deadline to decide the new contracts by July 17, when the one held by Sukleen’s parent company Averda expired. Averda handled the garbage for Beirut and Mount Lebanon.

He said that some bids for the contracts had been evaluated by just one auditor, when the rules of the tenders required at least two. An ad hoc ministerial committee on the garbage crisis is relying on the international firms Ramboll, IGIP and Fichtner to evaluate the bids.

– With additional reporting by Marc Abizeid and Nizar Hasan