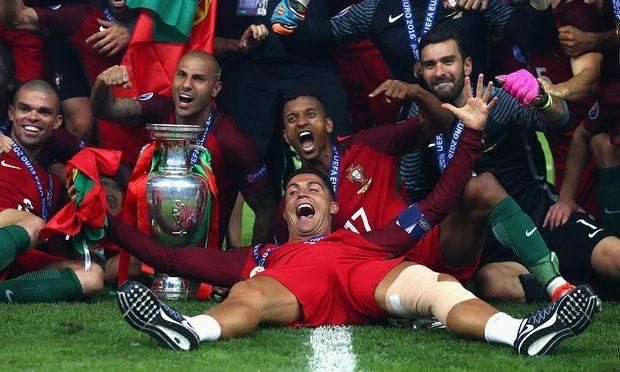 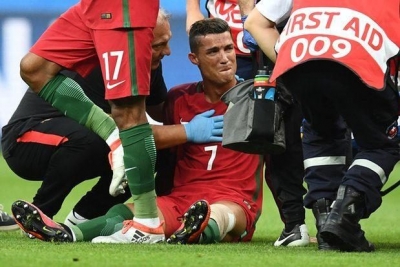 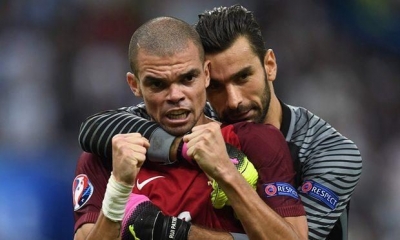 In the end, Cristiano Ronaldo had his hands on the trophy even if it was not the way the ultimate showman had intended. Portugal, the team that finished third in their group, had found a way even on a night when their greatest footballer was taken off on a stretcher. The players of France were on their knees and suddenly it was a sunrise of a smile on Ronaldo’s face, in stark contrast to the devastation that had been seen earlier in the night.

Has any player been through as many contrasting emotions in the space of a major final? Ronaldo was in tears when he left the pitch with his damaged knee in the first half. He had tried desperately to carry on and when he finally accepted it was futile it felt like a grievous setback to Portugal’s hopes of denying France the outcome that would have meant so much in this city. Ronaldo looked broken. The final was deprived of its main attraction and at that stage it was tempting to wonder whether his team-mates truly believed they could cope.

Portugal subsequently played like a team affronted by the suggestion they might be overly reliant on one man. They gave everything to keep out France during the long passages when the host nation put them under pressure.

Their sense of adventure grew as the game wore on and, ultimately, Éder’s decisive goal in the second period of extra time won a test of endurance. Their run of 10 successive defeats to France, stretching back to 1978, was over and Ronaldo, his leg heavily strapped, climbed the steps to collect the silverware – an excruciating low, an exhilarating high and a night like few others.

Portugal can duly reflect on their greatest ever victory, made all the more remarkable by the fact they could not beat Iceland, Hungary or Austria in the group stages. Their safety-first tactics will not appeal to everyone but nobody could dispute their competitive courage and mental toughness after the jarring challenge that meant their three-times Ballon d’Or winner was unable to influence the game in the way he would have imagined.

Fernando Santos, their wily old manager, has put together a tough, obdurate side. Their goalkeeper, Rui Patrício, had a fine night and France seldom threatened after that moment, at the end of normal time, when the substitute André-Pierre Gignac turned inside Pepe in the penalty area to leave himself with the opportunity to be a hero. Gignac scuffed his shot against a post, almost in slow motion, with the clock ticking into stoppage time. The game went into an additional 30 minutes and France gradually ran out of ideas.

Portugal might also reflect they were fortunate earlier that Antoine Griezmann misdirected his header with another of the game’s few clear opportunities. At times, sans Ronaldo, it seemed like they did not entirely believe in their own ability to get behind the French defence and that conservatism certainly suffocated parts of the games as a spectacle.

There were signs, however, from the 70th minute onwards that they were willing to play with more adventure. Raphaël Guerreiro, Portugal’s left-back, struck the crossbar with a free-kick in extra time –even if it should have been a foul the other way – and a couple of minutes later, the ball was at the feet of Éder, 25 yards from goal. Éder finished last season on loan at Lille and his brief time at Swansea City, having signed for £5m from Braga last summer, can probably be encapsulated by the South Wales Echo describing him as “one of the most disappointing transfer flops” in the club’s history. His shot was struck with power and precision, arrowing its way into the bottom right-hand corner of Hugo Lloris’s net. Portugal had their breakthrough and it seemed like every single member of their entourage was on the pitch to celebrate.

For France, it was a galling way to end the tournament, but the truth for Didier Deschamps and his players is that they did not show enough wit and creativity around the penalty area. Olivier Giroud had one of his frustrating nights, Griezmann faded after an encouraging start and it was strange that Deschamps decided to take off Dimitri Payet in the 57th minute when the West Ham player had been troubling his opponents. Maybe the enormity of the occasion was weighing on French minds, or perhaps it worked against them that they had a day fewer than Portugal to prepare. Whatever the truth, they will be left to contemplate why they were unable to take advantage of Ronaldo’s misfortune.

The injury occurred after eight minutes when Payet’s knee followed through, at speed, into the side of Ronaldo’s left leg and there was not a single moment from that point onwards when the Real Madrid player looked pain-free.

Nine minutes later he was down again, signalling for help, before being taken off for a second round of treatment. This being Ronaldo, there was a desperate attempt to see how far his powers could stretch, but it always seemed unrealistic when he made one last attempt to run it off. Ronaldo finally conceded defeat in the 25th minute and collapsed to the ground for the third occasion.

The ovation as he was carried off suggested the crowd recognised genuine greatness. His team-mates, however, seemed intent on making sure his absence was not the decisive factor.