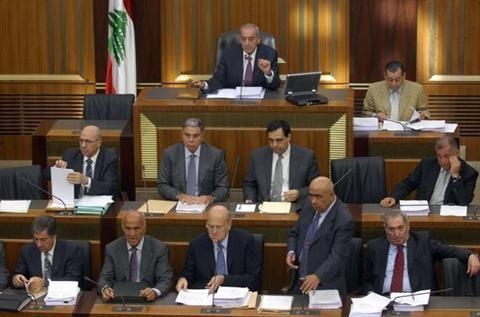 The law, which is not scheduled to take effect for at least one year, prohibits smoking in public places such as restaurants, bars, cafes and offices and bans all forms of tobacco advertising and promotion such as billboards and magazine adverts as well as tobacco company sponsorship of concerts and other events.

Individuals caught smoking in enclosed public spaces will be subject to a fine of LL100,000.

An amendment, introduced to the bill at the request of Metn MP Ghassan Moukheiber, stipulates penalties ranging between LL1 million to LL3 million for owners and managers of public establishments if their clients are caught smoking inside.

The police and inspectors from the Health Ministry and the Economy Ministry’s Directorate of Consumer Protection will be responsible for monitoring the implementation of the law.

Tourism Minister Fadi Abboud proposed adding tourism police to the roster of authorities monitoring the law and an amendment based on the suggestion was added to the law.

Another amendment banned smoking in air-transportation facilities and places of worship.

Implementation of the law will take place gradually based on the type of establishment. The owners of tourist establishments, which include restaurants, bars and hotels, have a period of one year to comply before enforcement begins.

Speaking to The Daily Star shortly after the law was endorsed, Beirut MP Atef Majdalani, head of Parliament’s Public Health, Labor and Social Affairs Committee and physician, praised the law.

“I believe Parliament made a great achievement today by approving the tobacco-control proposal, which we consider to be a civilized law making Lebanon one of the civilized and advanced states,” he said.

“Its results will appear gradually in terms of a decline in the number of smokers or diseases related to smoking,” he added.

Majdalani acknowledged that the implementation of the law “will be difficult,” adding that the relevant authorities should work to enforce it.

About three hours after it began, the session lost quorum when lawmakers from the Future Movement and the Lebanese Forces walked out of Parliament, as Minister of State and Zahle MP Nicholas Fattoush was defending his proposal to amend Article 93 of the Shura Council’s bylaws.

The amendment calls for setting up a mechanism to implement decisions made by the council.

The council has issued a decision obliging the state to pay Fattoush $250 million in compensation for suspending activity at his stone quarries.

Future bloc MP Ghazi Youssef told The Daily Star that lawmakers from his bloc left the session to prevent the state from paying the compensation.

His colleague, Khaled Zahraman, a lawmaker for Akkar said: “It is a scandal that a cash-strapped state pays this amount of money.”

Speaker Nabih Berri will reconvene the session on Aug. 24.

Unlike last week’s session, Wednesday’s was calm and saw no heated discussions except for a short exchange of words between March 8 and the March 14 coalition lawmakers at the beginning of the session.

A division between the two camps wasn’t apparent during most of the discussions, with MPs from one side supporting proposals by lawmakers from the opposing camp.

At the beginning of the session, Chouf MP Mohammad Hajjar, from the Future bloc, said the government did not respond within the deadline to a question that he filed about its role in the kidnapping and release of seven Estonian cyclists in Lebanon.

Berri asked Hajjar to turn the question into an official inquiry, promising to chair a question-and-answer a session for the government soon.

Baabda MP Ali Ammar, a Hezbollah official, called for summoning French Ambassador to Lebanon Denis Pietton to ask him about the issue, saying that France played an important role in securing the tourists’ release.

“Why isn’t the Syrian ambassador summoned and asked about some remarks,” asked Future bloc MP Ahmad Fatfat. “And the Saudi ambassador as well,” interrupted Ammar, prompting Berri to intervene and halt the exchange.

Parliament passed eight other laws Wednesday, including a law proposal to finance an increase in judges’ salaries.

Batroun MP Butros Harb voiced his support by saying “Lebanon’s reputation hinges on that of these judges. I support this draft law so that judges can have a dignified life.”

He called for allowing retired judges to benefit from the proposal as well. An amendment to that end, which was supported by Aley MP Akram Shehayeb, was introduced to the bill and an amendment allowing religious court judges to receive the raise was also passed.

Sidon MP Fouad Siniora asked Prime Minister Najib Mikati whether the Cabinet had studied the real cost of the move and its effects on inflation and economic development in the country.

Finance Minister Mohammad Safadi said he was aware of the “dangers” of such a decision.

“But it appeared that all colleagues in the March 8 and March 14 coalitions support this proposal,” he said, adding that the move would cost LL27 billion. But Siniora voiced fears that the cost would turn out to be much higher.

For his part, Mikati ruled out any repercussions on inflation rates and said the Cabinet could not oppose financing a raise in the judge’s salaries.

Parliament also passed a draft law with an amendment that allows inspectors of the Central Inspection Department to advance four pay levels, alongside educational inspectors as mentioned in the initial version of the draft law.

They were also granted benefits equivalent to what they would receive after one year of additional service.

Parliament withdrew a proposal on electronic transactions after Mikati said the Cabinet was preparing a draft law on the matter.

On his way out of Parliament, Mikati said the session was “productive and important whether regarding [laws passed] in relation to judges, banning smoking in public places or other decisions.”