No Deal Yet in Lebanese-Australian Child Custody Case 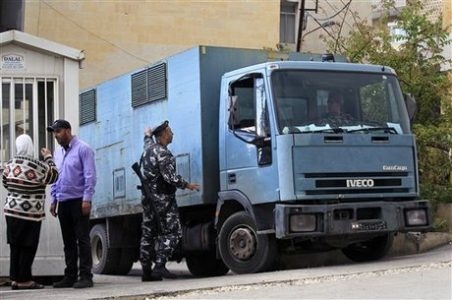 The Lebanese father of two children at the heart of a high-profile custody dispute has said he will not drop attempted kidnapping charges against his estranged Australian wife, who tried to take the children from him two weeks ago.

Sally Faulkner has been jailed in Lebanon along with prominent Australian TV journalist Tara Brown and Brown's three-person camera crew on charges relating to a botched attempt to seize Faulkner's two children on their way to school in Beirut. Another four suspects, two Britons and two Lebanese, have also been detained and charged.

The father, Ali al-Amin, said he does not "have anything against Sal," but does not want to drop charges. Faulkner has previously said al-Amin took the children from Australia to Lebanon without her permission.

Police brought Faulkner and Brown to a courthouse in a Beirut suburb to be questioned by Judge Rami Abdullah, but the two were led out after just five minutes and returned to the women's jail where they are being held. Al-Amin and an official from the British Embassy had met with the judge earlier.

The judge postponed his inquiry until Wednesday to allow lawyers to continue negotiations. Lawyers involved in the case say the parties are being asked to come up with a comprehensive deal before the case reaches court.

Al-Amin indicated Monday that he wanted to negotiate separately with Faulkner and was put off by the idea of amending the charges against the other suspects as part of a comprehensive deal.

"They're trying to link everything up with (Faulkner) but I don't have time for that," said Ali. "The kids are good, that's the most important thing. And everything else, we'll see what happens."

Faulkner's lawyer, Ghassan Moughabghab, told The Associated Press that al-Amin's legal team halted negotiations on Saturday and was not making concessions. "He said he is not in a hurry," the lawyer said.

Joe Karam, who is representing the two Britons, said "any peaceful agreement will benefit everyone."

Adam Whittington, a former British police officer, is alleged to have masterminded the botched operation to seize the children, ages 3 and 5, then smuggle them out of the country by boat to Cyprus. He heads the Britain-based Child Abduction Recovery International.

Whittington has said Australia's Channel 9 network financed the operation, depositing over $100,000 in fees to his company's account. Brown's Channel 9 crew was in Beirut when Faulkner sought to take away the children.

Karam said his other client, Greg Michael, entered a hospital for a second time over the weekend after suffering a "crisis" and showed physical symptoms. "He is receiving fair treatment," Karam added.

The suspects also face charges filed by Al-Amin's mother, who was struck and knocked to the ground during the incident two weeks ago. Al-Amin said she suffered a head injury but was recovering.

The nine suspects face up to 15 years in prison if tried and convicted of the charges, the judge said last week.