Meet The Iraqi Refugee Who Tried To Repay Over $18,000 In Welfare Money After He Became A Success 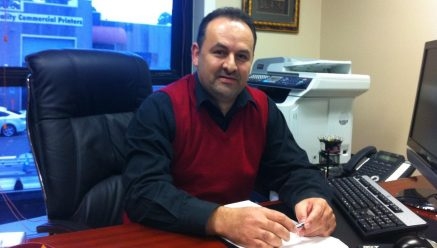 In 2009, Sam Eisho walked into the Centrelink office at Maroubra and tried to give the staff a cheque for more than $18,000.

Told to line up at the end of the claims queue, he attempted to explain that he was there to pay back what he felt he owed the Australian Government.

The amount was equivalent to all the welfare payments he received between 1999 and 2001, when he first arrived here and before he started the construction company he’s successfully built.

He’d come a long way since he was nearly killed at an Iraqi checkpoint, fleeing Saddam Hussein’s regime.

Travelling into Kurdistan, the autonomous region which encompasses parts of Eastern Turkey and Northern Iraq — where Eisho is from — the guards decided they wanted his cash, a small amount of money he needed to complete the journey to see his family.

Enraged, he scrunched the notes — emblazoned with the face of the now-executed dictator — and threw them into the dirt at his feet.

He was led away and locked in a room. And if he had not seen a solider he knew from university, who pleaded for his life, Eisho is sure he would have been killed.

“They would give you a very hard time … The north of Iraq was separate then,” Eisho told Business Insider.

That was when he decided the leave. 11 days after marrying his wife in 1996, she and the civil engineer fled. He was 28 years old, and running from the country he was born in.

After flying to Turkey, they travelled to Greece, at times hidden under furniture in the back of a truck, his wife nearly suffocating. And Eisho — who completed his Bachelor degree at the University of Mosul, spent three years making mattresses.

He came to Australia through legal channels. His uncle, a doctor already living here, was eventually able to sponsor him, and he arrived on the first day in May, 1999.

Since then Eisho, the Managing Director of SR Construction, has built a successful business. Directly, he employs more than 40 people, and has more than 100 sub-contractors, with offices in Sydney’s Hillsdale and Ingleburn.

None of it, he says, would have been possible if was not for the support he received from the Australian Government when he got here. It was this debt that saw him standing in the Centrelink line in 2009, trying to explain that he wanted to pay back what he felt he owed.

“I could not have done anything without Australia’s support.”

Bureaucracy thwarted him. A cheque made out to the Collector of Public Money (pictured at the foot of this story) for $18,641.43 was returned with a letter suggesting Eisho donate the sum.

In the accompanying note, he had asked if his money could be put towards schools and hospitals.

Asylum seekers are never far removed from Australia’s political rhetoric; processing of refugees is one of few issues where there are marked policy differences across the country’s political spectrum.

Eisho arrived in Australia legally – it was Greece where he claimed asylum – though he did benefit from a social welfare system others are accused of wallowing in.

He is an exception to what is, by some, painted as a rule.

Eisho was able to secure a builder’s licence after completing a TAFE course.

Finding work though, was harder. To make ends meet Eisho went to a group interview for a job at the Coles at the Eastgarden shopping centre, now a short walk from his office in Sydney’s south.

Applicants were told to complete an aptitude test, and wait a few days until they were contacted. After the hiring manager saw his results, they said: “You start tomorrow.”

The next day while he was on his lunch break, a contractor contacted him, after seeing his advertisement in the local newspaper.

“They called and said we have seen your ad in the Southern Courier.

“They said can you come now, and I said ‘of course.”

“I left Coles without even any notice, and they started giving me some work, like tiles here, doors there.

“I bought a Toyota Cressida for $500 with savings from Centrelink, me and my wife.

“And then I applied for a credit card from ANZ. That gave me $5000 … to buy tools, to buy petrol. It was very tough anyway.

“She knew I was struggling with money.”

He has since paid it back twice over. And as well as gifting the $18,000 Eisho has also, he said, donated around $60,000 to Hospitals, and his daughter’s primary school.

While he will always feel indebted for the financial assistance that helped make him, Eisho said the main reason he gives so much, is the care his wife received when she gave birth, in Australia, to the couple’s daughter — and the contrast to the health care system in his homeland. 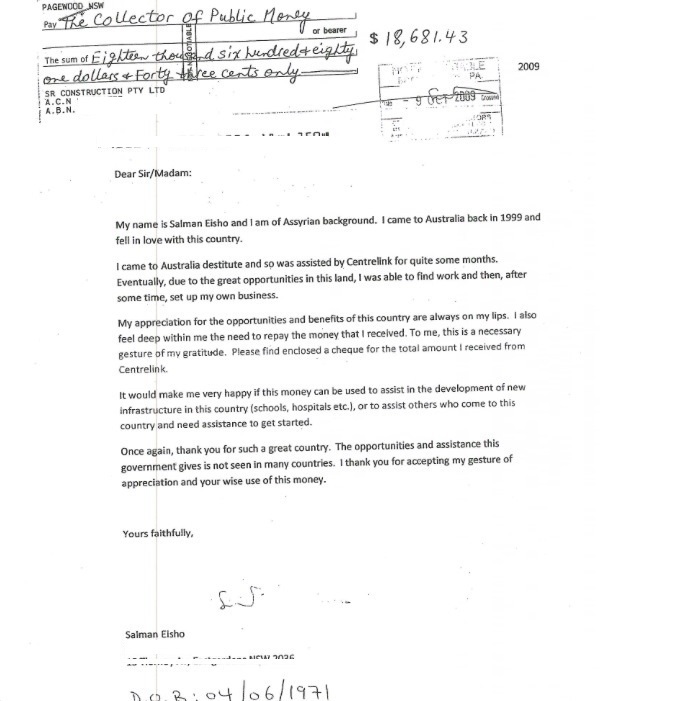