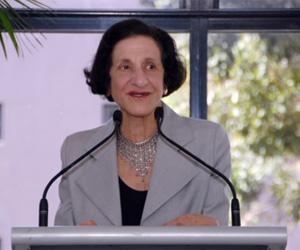 On 1 March 2001, Prof. Marie Bashir made history by being the first person of Lebanese background to be appointed New South Wales Governor - the highest executive position in the state. At her installation ceremony, Premier Bob Carr described the former Clinical Professor of Psychiatry at the University of Sydney as "the most qualified Governor NSW has seen."

But not only was her appointment a cause for celebration within the Lebanese-Australian community, it was a victory for all Australian women too: Prof. Bashir is the first ever female New South Wales Governor. It took a Lebanese girl to break this glass ceiling!

Born, of Lebanese descent, in Narrandera in the Riverina district of New South Wales, Marie Bashir was educated at Narrandera Public School and Sydney Girls High School. She gained her bachelor degrees in medicine and surgery in 1956 from the University of Sydney. She chose The Women's College where she was once Senior Student for the press conference to respond to the announcement of her appointment as Governor.


"When the suggestion was made to me... to begin with I was absolutely spellbound and speechless. Thinking about it, it seemed to me to be symbolic about the way our country is advancing in a sophisticated manner, that it would consider asking not only a woman, but a woman whose work is in a field that is not always popular. It is unpopular to work in mental health, with the disadvantaged and with indigenous people. It is also unpopular to be counted among women who have children and work, women from non-English speaking backgrounds, women who have an opinion. It seemed to me that to reject such a high challenge would be an insult to the history of our State."


After graduation Dr Bashir taught at the Universities of Sydney and New South Wales, increasingly working with children's services, psychiatry and mental health services, and indigenous health programs. At the time of her appointment as Governor of New South Wales, she was Clinical Professor of Psychiatry at the University of Sydney (a post she took up in 1993); Area Director of Mental Health Services Central Sydney (from 1994); and Senior Consultant to the Aboriginal Medical Service, Redfern (from 1996) and to the Aboriginal Medical Service, Kempsey.

Professor Bashir's widespread involvements and interests have included juvenile justice, research on adolescent depression, health issues in developing countries, education for health professionals and telemedicine and new technologies for health service delivery. Along with many professional medical association roles, she was, at the time of her appointment as Governor, a member of societies as diverse as Amnesty International, the National Trust, the NSW Camellia Research Society and the Tandanya National Aboriginal Cultural Centre.

Professor Bashir has a great interest in music and studied violin at the NSW Conservatorium of Music where she played in the student orchestra and in chamber music classes. She is a patron of the Sydney Symphony and Opera Australia.

In addition to her distinguished career Dr Bashir was named Mother of the Year in 1971. She is married to former Wallaby captain Sir Nicholas Shehadie AC OBE. They have three children and six grandchildren. Professor Bashir was Lady Mayoress of Sydney from 1971 to 1973 when Sir Nicholas was Lord Mayor.

Her Excellency Dr Marie Bashir is the quintessential role model for every Lebanese youth. Not only has she added so much to the Australian community especially in the area of health, but despite this she remains to uphold and take pride in her Lebanese heritage. Having traveled to the Land of the Cedars for the first time during her initial year of marriage, Dr Bashir is quoted to have said:
"As I looked down [from the aero plane descending into Beirut] onto that celebrated coastline and across to the beautiful snow-capped mountains, an extraordinary cascade of electrifying emotions almost overwhelmed me… it reached a powerful crescendo as I walked across the tarmac to glimpse, through the tears I could no longer hold back, the extended family members whom I had never met, and the gathered clans of at least three villages waiting to shower me with endless love and generosity."
What a pleasure to have such a passionate Australian Lebanese as our governor!