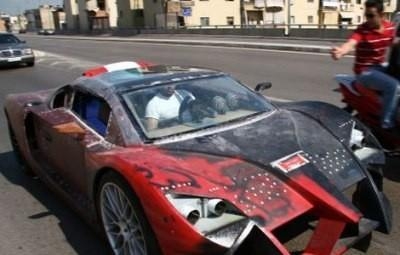 Beirut- In an otherwise dynamic Lebanese society, fast cars and car racing are almost out of common man's discussion. But a young graduate of Industrial Automotive Design could well change the trend with his opus Frem F1.

David Frem, 25, a student of American University of Science and Technology is the proud designer of the first super car in Asia. Quiz him about what got him into designing the car and he beams, “I believed that Arabs needed to do something other than constructing buildings. I thought we could venture into heavy industries like automobile. Plus, I always had a dream to make a car that could race Ferrari.”

David firmly believes that his initiative towards designing and executing a formula car will be a great step to bring his nation on the international map for automobile engineering and car racing. He explains, “Manufacturing a car demands high level of intelligence. Even the best design engineer needs in-depth research and development to make a world-class car. Engineering will go to a new level and bring a new identity to my country.”

David who worked on the automobile along with Phoenix Machinery, a member of INDEVCO group shares, “We had just one dream; to design a car with one identity - Lebanon.” David informs that the commencement of Frem F1 required three years of continuous studies and three other years of hard work under rather difficult circumstances. The model was then executed in Lebanon by a crew of industrial workers under his supervision.

Frem F1 named after its creator, is built with a 16v, 2.00 cc powerful Vw engine and has an independent suspension. It comes with multi-specialty functions such as strong xenon lights, camera for eased reverse parking, a convenient navigation system and a glass roof to offer panoramic view of the sky. The car with its body made from fiber glass is10 cm high from the ground for better stability and traction. Its aluminum steering is designed and made by David. The interiors is accessorised with Bose audio system and Audi gear box. 22 inches wide rims supported by Dunlop Sp9000 zr help the vehicle zoom by. The car's design was the subject of many studies conducted in Lebanon. David humbly adds that Frem F1's design is qualified to compete with the best cars in the world such as Ferrari, Lamborghini, Aston Martin etc.

So what was his inspiration behind the design? “The wolf. It intrigues me. The animal has got some mysterious characteristics,” he replies. For someone whose passion is cars, David says it is overwhelming to see that he made one himself. “You can’t imagine how it feels when you stand in front of a car you made it with your own hands and it carries you name. Its amazing; it’s a dream coming true,” he gushes.

“I always saw Frem F1 to be a brand that will compete with the best formula cars and I can tell you that Frem F1 is 'the' new brand for sports cars that will establish its position between all the giant brands. When I take the Frem F1 out on the streets, people couldn't believe what they saw. A super car in Lebanon was a little too hard for them to digest, but they loved it,” he grins.

David will also have the honour of his creation being exhibited at the 2009 North American International Auto Show in Detroit in January 2009. David shares, “Five months ago, I presented a prototype to the jury at Michelin Challenge Design. They considered my application and told me that I would be intimated in August about my selection. On August 1, I received an e-mail confirming my participation. I was so thankful to god for my design being accepted. I look forward to participating in the motor show at Detroit.”

Not one to rest on his laurels, David is already dreaming of his next invention; Frem F2. He reveals, “I am preparing to begin the process of execution. Its design is amazing. I am also looking at building a factory that will manufacture limited editions of hi-tech and exotic sports car like the Pagani Zonda. Cars is what I want to be into all my life. It is my goal to see Frem F1 participating in the Grand Prix of Endurance. And I won't rest until then.”

He reiterates, “If I had the financial resource, I would make the best super car in the world. I could make Frem F2 the best in the industry. It is high time we pay attention to design and technology.” David argues that tourism alone should not be the identity of Lebanon. “We can also work on other industries and develop a challenging market between all sectors,” he says.

And what encourages him to take on the challenge is his meeting with the President Michel Suleiman who has agreed to officially announce it to the planet that Frem F1 is the fist Lebanese super car.