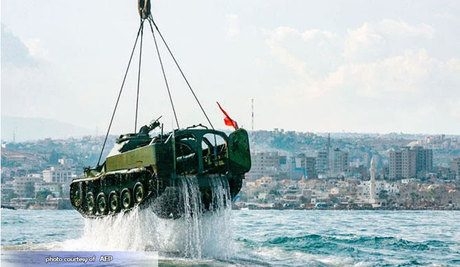 Lebanese environmentalists on Saturday sank 10 old tanks and armored vehicles to the bottom of the Mediterranean Sea in a novel attempt to attract divers and create new habitats for marine life.

Three kilometers off the coast of the city of Sidon, a huge crane on the back of a ship maneuvered the military hardware into place over the water before dropping them down to the seabed one after the other.

The initiative to create an "underwater park" is spearhead by a local group, Friends of the coast of Sidon, which got the Lebanese Army to hand over some of it old vehicles for the project.

"This will be a paradise for divers and a place where we can develop underwater life," said NGO representative Kamel Kozbar, who hopes seaweed will soon cover the vehicles.

Lebanon boasts some 200 kilometers of Mediterranean coast but beaches have not been spared from a waste and garbage crisis that has plagued Lebanon for years.

In Sidon, a mountain of smelly trash has scarred the shoreline, despite the presence of a new waste management facility.

In a region fraught with tensions the latest project also has some political undertones.

The tanks have been placed with their turrets facing towards Lebanon's southern foe Israel "out of solidarity for the Palestinian people," Kozbar said.