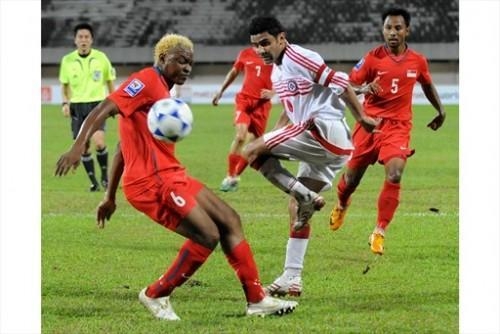 Despite recent political volatility in Lebanon, which has seen the country's domestic league indefinitely postponed, local football fans still have something to cheer about in the form of their national team. Eliminating Maldives 6-1 on aggregate in the qualifying competition for the AFC Asian Cup 2011 covered the mid-east nation in glory in an otherwise quiet April on the FIFA/Coca-Cola World Ranking. The two results moved Lebanon up eight places to 140th, making them the best movers for the month of May.

Lebanon's double-header with the South Asians came when AFC decreed that the top three finishers from the last Asian Cup, and the winners of the 2008 and 2010 AFC Challenge Cups, would join hosts Qatar in the next continental finals, a decision which dramatically reduced the number of qualification matches. As a result, Lebanon and Maldives became the only pair to lock horns in a preliminary contest, with the winners advancing to the next qualifying stage where 20 teams will be divided into five groups and battle it out for ten places at Qatar 2011.

Lebanon, the Asian Cup 2000 hosts, got their campaign off to a flyer by beating Maldives 4-0 in Beirut on 10 April. A fortnight later, they came away with a 2-1 win over the South Asians with Mohamed Korhani and Nasrat Al Jamal on target to round off their impressive run to 23rd in the Asian standings.

Decisive qualifier ahead
The emphatic victories came as a timely boost for coach Emile Rustom's charges, who disappointed in the opening two games of Asia's third stage of qualifying for the 2010 FIFA World Cup South Africa™. A 1-0 home defeat by group favourites Uzbekistan on 6 February made Lebanon's second qualifier against Singapore a crucial one.

However, with Ramez Dayoub, Abbas Ali Atwi and Ali El Atat absent due to injuries and captain Roda Antar missing with a visa problem, coach Rustom had to make six changes to the team. As such, it came as little surprise that Lebanon lost 2-0.

Rustom, however, vowed to bounce back and take revenge when the two sides met in the last group match on 22 June. "Missing four key players proved costly for us although we tried our best," he said. "But I hope all our players will be back and we can get a result against Singapore in the return leg, where we will play at home."

Languishing at the bottom after two defeats, Lebanon are left with no options but to go all-out for their first points against Saudi Arabia in the next qualifier on 2 June. Despite the daunting task of taking on the three-time Asian champions, who are 86 places above them on the FIFA/Coca-Cola World Ranking, the team can at least draw inspiration from their Germany-based duo of Youssef Mohamad and Antar, who have been making waves with Cologne since last summer.

"We must believe in ourselves more if we are to feature in the latter stages," said Antar, whose scoring prowess is much-needed in the team. "Although we have to respect our opponents, we shouldn't fear them."