Bookmark this
November 16, 2011 By Justin Salhani (The Daily Star) 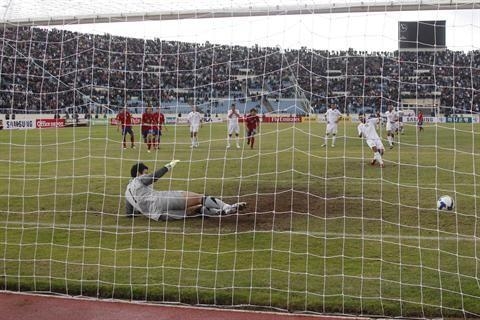 Lebanon now have 10 points with one game left to play away against the UAE in February while South Korea also have 10 points but lead the group on goal difference.

Lebanon began the match with intensity as they pressed high up the pitch. The South Koreans looked uncomfortable with the ball and their overall play was panicky.

The goals began early as in the fifth minute a free-kick was taken from just outside the right side of the penalty area. The free-kick was knocked down and then deflected across the goal before Ali al-Saadi got on the end of it with his right foot, sending the fans into a frenzy.

Lebanon was turning out an assured performance with captain Roda Antar bossing the midfield with a calm composure not seen against Kuwait last Friday.

Lebanon were continuing to press high and looked to add to their early goal, but South Korea gained some confidence and began attacking around the eighth minute. Lebanon looked assured in defense though, as South Korea looked troubled to connect passes with many being picked off by Lebanon’s aware defense.

South Korea continued to attack while Lebanon sat back and stifled the South Korean attack by persistent fouling.

South Korea came close in the 11th minute when Ziad Samad dropped the ball in the penalty area, but it was quickly knocked out for a corner by a scrambling Lebanese defense.

South Korea saw a goal called back in the 13th minute for offsides after Lee Keun Ho finished a knockdown.

The team continued the aerial attack and in the 18th minute a high-crossed ball resulted in a penalty for the South Koreans after Saadi kicked Keun Ho in the face with an ill-advised bicycle kick. Koo Ja Cheol sent Samad the wrong way taking the score to 1-1.

Lebanon tried to slow down the pace of the game and spread out the field, playing the ball through midfield and on the ground.

The 31st minute saw Lebanon’s attack push out to the left wing where some combination play saw the ball played into Mahmoud al-Ali who was tripped as he was turning in the box, resulting in a Lebanon penalty. Abbas Atwi went low to the left as Jung Sung Ryong went right, putting Lebanon back on top at 2-1.

South Korea’s best chance to equalize in the first half came off a free-kick from Ja Cheol. The South Korean put the ball into the box but Haytham Faour steered the ball over. South Korea had one more opportunity when some nice combination play opened up a chance from the left side but the shot was low and left of the post.

Lebanon tweaked their formation in the second half, coming out in a 4-2-3-1 with Ali sitting high as an outlet for long clearances.

The second half was a high-paced affair with the game moving from end to end with little midfield play to speak of.

The South Koreans nearly broke through in the 63rd minute when a long ball found Ji Dong Won whose lofted touch beat Samad but was cleared by the oncoming defender.

Lebanon came right back up the other end and had the most dangerous chance of the second half, when a corner kick found Antar at the back post. Antar’s header rocked the post but was unable to increase the Lebanese lead.

The play grew sloppy as the quality of the pitch declined and South Korea had trouble connecting their passes. The Lebanese defense looked up to the job as they quickly intercepted pass after pass, though their counter-attacks didn’t last long.

The last quality chance for Lebanon came in the 87th minute when the Cedars put together a string of clean passes to put Ali into the box. The pitch once again played a factor as the forward slipped and the ball trickled to Sung Ryong.

Despite the continued frustration, South Korea didn’t roll over. They put in a few quality chances at goal during injury time including a header that made Samad come up with a diving save.

In the dying seconds, a cross fell into the Lebanese box for Kwak Tae Hwi whose shot looked destined for the back of the net when a defender’s leg deflected the ball out for a corner.