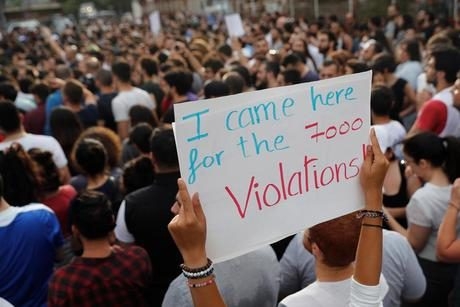 A secular coalition that ran in Lebanon's parliamentary elections said on Tuesday it will legally challenge the defeat of one of its candidates, slamming the vote count as untransparent.

Kulluna Watani, an alliance of civil society activists, had projected it would win at least two seats in the landmark May 6 vote -- an achievement in a country with a deeply entrenched political class.

But just one candidate, high-profile reporter Paula Yacoubian, scored a spot in the 128-member parliament.

A second, writer and feminist activist Joumana Haddad, was expected to win according to several preliminary party counts, and had been tearfully celebrating with supporters on Sunday night.

But as official results came in on Monday, it appeared Kulluna Watani had not scored enough votes to secure a second seat for Haddad.

"The day after the election, we learned that her competitor got the seat," said Wadih al-Asmar, a campaign organiser for Kulluna Watani.

It sparked an upheaval, with Haddad's devastated supporters gathering outside the interior ministry to demand a recount.

"The vote count was poorly managed. We have noted several elements that suggest possible fraud, which we will submit to the Constitutional Council," Asmar told AFP.

He blamed a "total lack of transparency," and said rival parties had been trying to intimidate Kulluna Watani's candidates and delegates at polling stations across the country.

Delegates from all lists are present inside the polling stations to monitor the process.

But Kulluna Watani's delegates were kicked out of 15 percent of the voting centres in the Beirut district where Haddad ran, said Asmar.

Another one of its female candidates, Rima Hmayyed, was assaulted outside a polling station in southern Lebanon on Sunday by supporters of Shiite powerhouse duo Hizbullah and Amal.

Lebanon's leading parties have largely maintained their grip on parliament in Sunday's vote, which was the first in nine years.

The 2009-era parliament extended its mandate three times but finally set a date for elections last year after agreeing on a new, more proportional electoral law.

Kulluna Watani ran a nationwide campaign with 66 candidates to challenge what it called the corrupt status quo.

The Lebanese Association for Democratic Elections, an internal watchdog that monitored the vote, noted multiple concerns with the counting process.

They included ballot boxes being left unattended outside and arriving hours late to counting centres, and individual ballots not being properly sealed.