Lebanon braces for snow at altitude of 300 meters 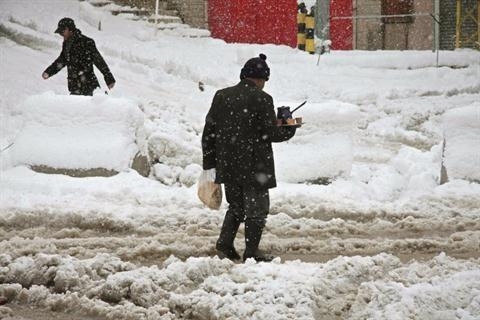 BEIRUT: The storm that hit the country earlier this week is expected to continue into the weekend, with snow falling Friday as low as 300 meters above sea level, according to the meteorological department at Rafik Hariri International Airport. The weather Thursday caused damage across the country including power cuts, damages to public utilities, a car accident, and a drowning that authorities say may be related to the storm.

In the northern town of Zghorta, snow fell above 500 meters above sea level, forcing school closures in the area. Public and private schools were also closed in the northern district of Koura, where residents were unable to access gas stations to purchase heating oil.

Abdel-Rahman Hajj, the mayor of the Mishmish village of Akkar, said that snow covered all of Akkar Thursday, and snowplows could not clear roads because they were blocked by layers of ice and snow.

“Residents of these villages have no access to electricity, water, gas oil, and internal transportation is difficult,” Hajj said.

Hajj added that “there are four sick people in Wata Mishmish who are in critical condition and need dialysis.” He called on the Lebanese Army and Red Cross to help transfer these patients to nearby hospitals.

In north Lebanon’s Batroun and Tannourin, the storm damaged agricultural greenhouses, particularly in the Kfarhalda area of Batroun. In Tripoli, heavy winds and rain uprooted several trees and billboards, while causing a partial collapse of the famous “Allah” sign in Nour Square in south Tripoli.

The city’s mayor, Nader Ghazal, visited the square and the municipality’s maintenance teams fixed the sign the same day.

In the south, water levels in the Hasbani River rose significantly as flooding affected orchards near the river, and damaged irrigation canals and agricultural support systems.

In Sidon, residents complained that the heavy rains revealed shoddy work on infrastructure projects, with cracks appearing on several roads in the Sidon area. The city’s corniche also sustained slight damage, while further south, in Tyre, the balconies of two homes collapsed in the Raml neighborhood.

Separately, two Syrian brothers and a Lebanese man were injured Thursday when two vehicles collided head-on near Sidon. Police said the accident, which took place midday in Majdalyoun, east of Sidon, was due to bad weather conditions. They said two Syrian brothers from the Hussein family who were riding in a Hyundai were injured, one seriously.

The third man was identified as a Lebanese national whose last name is Khalil.

In the north, Saoud Mamdouh Dandashi was reported to have drowned in the Al-Kabir river on the Lebanese-Syrian border in the north. The National News Agency said that search efforts to body of Dandashi, from the village of Mashta Hammoud, were to continue amid harsh weather conditions.

The army is carrying out ongoing rescue operations, and a naval patrol rescued two capsizing fishing boats in Tripoli, carrying eight passengers in total. The people rescued were given first aid and taken to shore.

A dog is seen on snow in the southern town of Jezzine. (The Daily Star/Mohammed Zaatari)

A man walks on snow covered roads in the southern town of Jezzine. (The Daily Star/Mohammed Zaatari)

A bulldozer clears snow in the eastern mountain town of Bhamdoun. (The Daily Star/Mohammad Azakir)

Children leave their school early as their parents fear the snowstorm would close roads in the eastern city of Baalbek. (The Daily Star/Nidal Solh)

A man uses an umbrella to shelter during a snowstorm in the eastern mountain town of Bhamdoun. (The Daily Star/Mohammad Azakir)

Snow covers branches in the southern town of Jezzine. (The Daily Star/Mohammed Zaatari)

A man carries a coffee tray and bread as he walks on snow covered street in the eastern city of Baalbek. (The Daily Star/Nidal Solh)

People run during a snowstorm in the eastern mountain town of Bhamdoun. (The Daily Star/Mohammad Azakir)

Snow covers a tree in the eastern city of Baalbek. (The Daily Star/Nidal Solh)