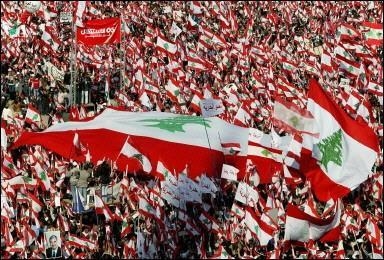 Monday marks the passing of another year of independent Lebanon. Flags will be waved, banners unfurled, wreaths laid and military parades performed. For nearly seven decades, November 22 has managed to unite all factions in observation of Independence Day.

Throughout these years, the Lebanese claimed to celebrate Lebanon’s independence. They insisted the word meant something, signified more than a flag and an anthem. Forgiveness, therefore, is in order should the following risk repetition: This is not the case.

How, exactly, can Lebanon consider itself independent? Take the enemy in the south, which never fails to seize an opportunity to sow terror and discord, never ceases to disrupt security and undermine sovereignty, flouting Lebanese territory with insouciance.

Then there are the regional and international players. Close and not-so-close neighbors, Western heavyweights and former colonialists clamber for a footing in Beirut upon which they battle to air their Middle Eastern grievances. They have interfered with every aspect of Lebanese daily life: security, defense, economy – even religion.

Far from denounce such flagrant intrusion, successive lawmakers have actively encouraged others to wade in and place a stake in Lebanon’s future. Too often, politicians resort to ideological alliances which give short shrift to the notion of the nation state in order to pamper local strongmen, before donning their suits and salutes in the name of independence.

Under their patronage, Lebanon has endured successive shocks. The land of the Cedars has become a playground, stomped upon by local and distant bullies. For all the talk of Lebanon constituting a free, sovereign state, the past has been characterized by unwillingness or inability to keep clear of foreign intervention. This is not what Bishara al-Khoury and Riad al-Solh suffered incarceration for.

Lebanon currently has a president, speaker and prime minister who seem intent on safeguarding what they see to be the country’s interests. But this has not stopped the triumvirate occasionally resembling a trio of horses, pulling the same cart in conflicting directions.

It is possible that Monday’s celebrations, with the swell of nationalist sentiment they shall bring, could jolt statesmen into working for an independence worthy of its name. Freedom, in its most essential form, cannot be won unilaterally. It requires combined effort, a shift each from of the people in power and the people who put them there. A commitment to put Lebanon’s needs first and stem the seepage of interference can only be achieved through unanimity.

Next November 22, as the brass band strikes up its An-Nashid al-Watani, the Lebanese are owed something which has for so long been buried beneath the pretence of its presence: true independence.