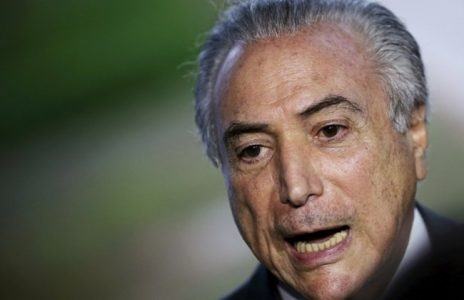 Btaaboura, Lebanon: Ten kilometers off the northern Lebanese coast, nestled between two mountains, lies the village of Btaaboura. Many of the inhabitances have left the sleepy town to seek their fortunes abroad. Amoung them is Michel Temer, the son of a Lebanese immigrant to Brazil, who is poised to become the next president of the South American country.

"He is a man's man ... 75 years old, but young at heart," his cousin Nizar Temer told The Daily Star, as he stood in front of Michel's ancestral home. He first opened his eyes to the world here, and from this corner of north Lebanon, his father decided to flee to Brazil to escape famine and war in the early 20th century.

"As soon as he arrived, he kissed the earth and kissed the giant stones that make up his house," Nizar described. The house itself is more than 200 years old.

At the time of the visit, he had just been appointed the president of the Brazilian Chamber of Deputies, a position he would hold for three seperate, two-year terms. In 2011, Temer was elected vice president and today, amid scandal and political intrigue, he stands poised to take over the presidency itself.

Dilma Rousseff, the current president, is undertaking a desperate bid to prevent parliament impeaching her over charges of corruption. If she falls, Temer is placed to take the helm of the nation of 205 million people, and the world's seventh biggest economy.

"But he never forgot where he came from ... During his first visit he took an entire day in order to come see the village and meet his long lost relatives,"

Youssef Barbar, another of Temer's cousins said. "His older siblings told his stories about our village and instilled in him the fact that he comes from this place."

His paternal cousin Youmna Barbar attributed Temer's love for the village of Btaaboura to his mother and father. "When he first entered the village, tears welled up in his eyes," she said. "I think he was remembering all the stories his mother Marcha Barbar and his father Nakhoule Temer used to tell him," she added. Barbar also spoke of her sincerest wish for him to get the presidency.

During Temer's first visit, he helped the local community build a church. The construction process is still ongoing, but the church's garden will be named in his honor upon completion. He also reportedly instructed the Brazilian Ambassador to Lebanon to expedite visa applications for residents of Btaaboura.

"We are very proud him, and we could see he was proud of the village and where he came from," Nizar said. "Most Lebanese don't even know our village exists, but now after one of its sons is about to become president ... we are known all the way to Brazil."

Temer was invited to Lebanon a second time in 2011 by then-President Michel Sleiman.

Before arriving, he got in touch with his distant cousin Tony Temer to get him to organize nine family members to join them for the official state dinner with Sleiman.

During the visit, there was a grand lunch held in his honor in the garden of his village church, the same one he had helped established years earlier. Nizar describes Temer's speech that day, how he said he was very glad to be in Btaaboura and how he dedicated his rank and position to the towns people and his family.

"Tell him he most important thing," the town's Mayor Bassam Barbar interjected. "He said that had he not gone to Brazi;, he would have like to become Btaaboura's mayor. 'It's a good thing you left then,' I shot back at him," the mayor quipped.

On his second visit, Temer promised to return to his village once he became president of Brazil.

"We hoped he would be able to pressure the politicians into paving our roads," his cousin quipped.

"Although this area is gorgeous, it is very deprived and the state does not care for it much."