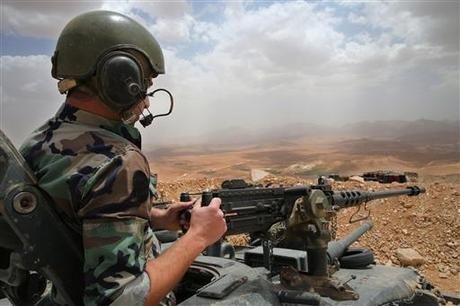 In a remote corner of Lebanon near the border with Syria, Lebanese troops have been quietly making steady progress, fighting against Islamic extremists holed up in the rugged mountains.

It is a fight less visible than the war against the Islamic State group in Syria, Iraq and Libya. But hardly a day passes without army artillery stationed on the edge of the town of Arsal pounding nearby militant positions.

Aided directly by the United States and Britain — and indirectly by Hizbullah and the Syrian army working on the other side of the border — the under-equipped Lebanese military has registered steady successes against the militants.

In recent months, Lebanese armed forces have clawed back significant territory once held by IS and al-Qaida's branch in Syria, known as the Nusra Front, and have killed and detained hundreds of extremists, forcing many others to flee. According to the army, the militants still hold about 50 square kilometers of land in the border area, compared with 20 times this size in the months after Syria's conflict began.

On a tour of the area with the army this week, an Associated Press team saw army positions set up every few hundred meters. Tanks and armored personnel carriers with heavy machine guns could be seen pointing toward the extremists' positions.

Most of the activity is around the border town of Arsal, which the militants briefly took over in August 2014. After five days of deadly fighting, the military pushed them out to the town's outskirts and into the surrounding mountains and has been battling them ever since.

Nearly 5,000 troops are now deployed in and around Arsal. They keep a close eye on any suspicious activity by the extremists who avoid movement during the day. Giant observation towers as well as many fortifications have been erected. U.S.-provided drones feed information to the army command near Beirut. Dozens of Lebanese troops have been killed or wounded over the months of fighting.

During the AP tour, a first lieutenant peered through binoculars toward areas controlled by the Islamic State group on the edge of Arsal when he spotted a vehicle moving several miles way.

"It's the tanker truck," the officer told some of the troops in the front-line position, referring to an identified vehicle owned by a Lebanese man who has a permit to cross into IS-controlled areas, where he owns plots of lands.

"Had it been a truck with a machine gun on top of it we would have dealt with it immediately," said another officer, pointing to two 130 mm guns that are always ready to fire.

The Lebanese military, generally seen as a unifying force in a country divided along political and sectarian lines, has received support and military assistance from the West. The U.S. and Britain have supplied the military with helicopters, anti-tank missiles, artillery and radars, as well as training. The American Embassy says the U.S. has provided Lebanon with over $1.4 billion in security assistance since 2005.

"The American assistance has been the most serious and most effective," said Hisham Jaber, a retired army general who heads the Middle East Center for Studies and Political Research in Beirut.

The stepped-up assistance came after Saudi Arabia announced in February it was halting deals worth $4 billion aimed at equipping and supporting the Lebanese military, in retaliation for stances by Hizbullah and Lebanon's foreign ministry.

Syrian forces and Hizbullah fighters have also helped the fight by clearing the militants from areas in Syria across the border from Arsal, hurting supplies for those in Lebanon.

Arsal is home to tens of thousands of Syrian refugees and in the early days of the Syrian conflict, which began in March 2011, became a major crossing point for arms smuggling to help Syrian rebels fighting to topple Syrian President Bashar Assad.

On August 2, 2014, some 2,000 members of IS and the Nusra Front overran Lebanese army positions as well as Arsal and captured two dozen policemen and army soldiers and took them to the fields outside the town. Four of the captured troops were killed.

"This (attack) was a turning point and the Lebanese army command decided to put limits on those criminal terrorists and to repel them and prevent any effect they might have on mainland Lebanon," said Brig. Gen. Mohammed al-Hassan, commander of the 8th Infantry Brigade that is deployed in the Arsal area.

Since then, the military has slowly recovered all strategic hills overlooking Arsal, surrounding it from all sides and separating the town from the outskirts held by IS and Nusra Front.

Al-Hassan said that just before the 2014 attack on Arsal, IS and the Nusra Front had some 7,000 fighters, whereas today there are about 900 IS gunmen and some 400 for the Nusra Front.