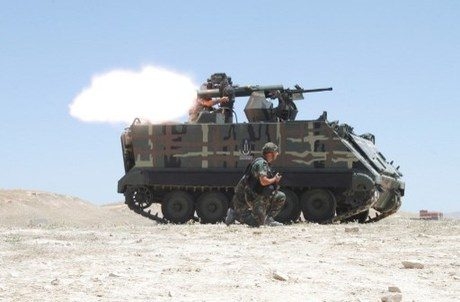 The Lebanese army continued pounding the Islamic State positions along the Syrian border overnight, massing reinforcements and pounding the area with artillery shells and rockets, the National News Agency reported.

The military shelled the IS posts on the outskirts of Ras Baalbek and al-Qaa during the night.

Early on Wednesday, the military continued to target intermittently the posts of jihadists in said areas and in Northern Bekaa town of al-Fakiha, NNA added.

On Tuesday, the army said that troops have advanced along the border with Syria, tightening the siege on areas controlled by the IS group.

The Lebanese army said in a statement that the troops discovered bombs and explosive belts left behind by militants in areas captured on the edge of the Lebanese border town of Arsal. It said that they also found the body of an unknown man.

Tuesday's advance came a day after hundreds of insurgents and civilians returned to Syria from the Lebanon border area as part of a deal negotiated with the Lebanese. With the departure of members of the Saraya Ahl al-Sham rebel group and al-Qaida-linked fighters, only IS remains in the border area.

The Lebanese army has been preparing for an all-out attack on IS positions along the Syrian border for weeks, massing reinforcements and pounding the area with artillery shells and rockets. The Syrian army and Hizbullah are preparing for a simultaneous attack on the Syrian side of the border.