Lebanese army Begins Offensive against IS on Syria Border 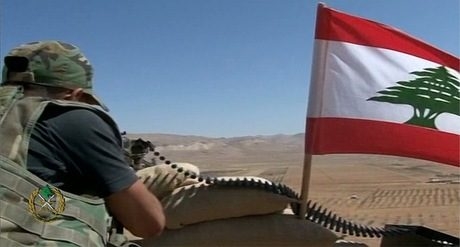 The Lebanese army announced Saturday the start of an offensive against the Islamic State (IS) group close to the Syrian border in the east of the country, where jihadists have been operating for several years.

"In the name of Lebanon, in the name of kidnapped Lebanese soldiers, in the name of martyrs of the army, I announce that operation 'Dawn of Outskirts' has started," army chief General Joseph Aoun said, referring to the mountainous outskirts of Arsal border region.

The announcement was made by the Lebanese commander Joseph Aoun on Twitter and the Central Military Media outlet.

Aoun had contacted the commander of the front in the outskirts of al-Qaa and Ras Baalbek and said: “We are looking forward to victory.”

The National News Agency reported later during the day that the army seized control of Tallet al-Mkhayrmeh in Ras Baalbek. In parallel, it pounded the IS posts in al-Qaa inflicting casualties among the militants' ranks.

Saturday's announcement came at the same time as Hizbullah and the Syrian army announced a similar offensive to clear IS militants from the Syrian side of the border, in the western Qalamoun mountain range.

Hizbullah, which provides military support to Bashar al-Assad's regime in Syria, launched last month an offensive to eliminate Syrian rebels as well as all jihadists formerly linked to al-Qaida from the region.

After six days of fighting, a ceasefire deal between Hizbullah and fighters from al-Qaida's former Syrian affiliate, previously known as the Al-Nusra Front, was announced.

Nearly 8,000 refugees and jihadists from al-Qaida's former Syrian branch were bused back to Syria following the deal and on Monday the last Syrian rebels were evacuated from the region.

The army is now launching an offensive against the IS fighters still operating in the area.

Arsal's outskirts had been used for years as a hideout by Syrian anti-regime militants but was also home to an unknown number of refugees seeking shelter from Syria's six-year war.