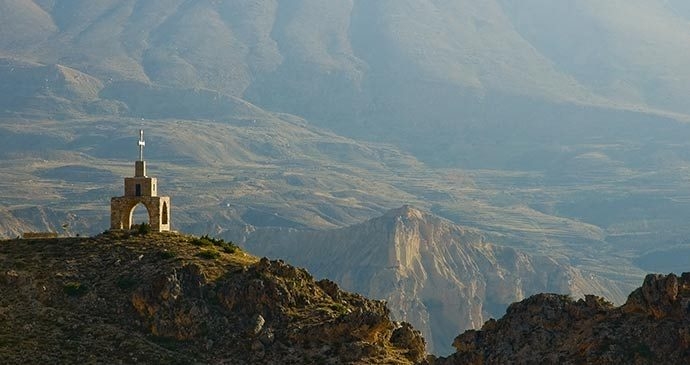 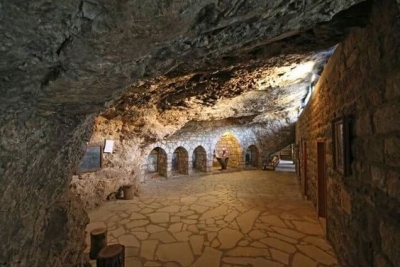 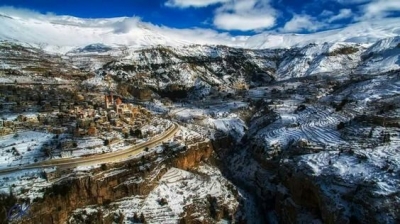 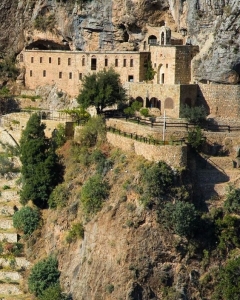 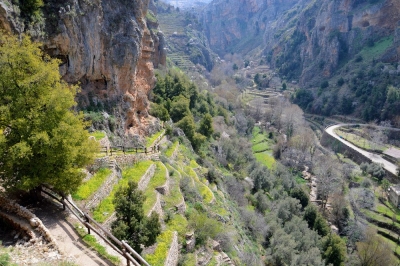 Kadisha Valley Arabic وادي قاديشا‎, also romanized as the Qadisha Valley and also known as the Kadisha Gorge or Wadi Kadisha, is a gorge that lies within the Becharre and Zgharta Districts of the North Governorate of Lebanon. The valley was carved by the Kadisha River, also known as the Nahr Abu Ali when it reaches Tripoli. Kadisha means "Holy" in Aramaic, and the valley, sometimes called the Holy Valley. It has sheltered Christian monastic communities for many centuries. The valley is located at the foot of Mount al-Makmal in northern Lebanon.

The integrity of the Valley is at risk due to encroachment of human settlements, illegal building and inconsistent conservation activity. Although it is not yet on the UNESCO "in danger" list,there have been warnings that continued violations may lead to this step.

The holy river, Nahr Qadisha, runs through the valley for 35 km from its source in a cave (grotto) a little way below the Forest of the Cedars of God. The sides of the valley are steep cliffs that contain many caves, often at more than 1000m and all difficult of access. The most scenic section of the valley stretches for approximately twenty kilometers between Bsharri Arabic: بشري, the hometown of Kahlil Gibran, and Tourza Arabic: طورزا.

It is here also that the Holy River, Nahr Qadisha, flows, its source being in a sacred mountain celebrated in the Scriptures.

The Cedars of God

The Kadisha Valley is near the Forest of the Cedars of God, survivors of the ancient Cedars of Lebanon, the most highly prized building materials of the ancient world. The forest is said to contain 375 individual trees, two claimed to be over 3000 years old, ten over 1000 years, and the remainder at least centuries-old. The Lebanon Cedar (Cedrus Libani) is described in ancient works on botany as the oldest tree in the world. It was admired by the Israelites, who brought it to their land to build the First and the Second temples in Jerusalem. Historical sources report that the famous cedar forests were beginning to disappear at the time of Justinian in the 6th century AD.

The Qadisha Valley’s many natural caves have been used as shelters and for burials back as far as the Palaeolithic period. The Aassi Hauqqa (cave) in particular, near Hawqa, Lebanon, has yielded archaeological items indicating Palaeolithic, Roman, and medieval periods of use.

Since the early centuries of Christianity the Holy Valley has served as a refuge for those in search of solitude. Historians believe that the Kadisha Valley has had monastic communities continuously since the earliest years of Christianity. It was also at times a destination for Muslim mystics, or Sufis, who also visited it for meditation and solitude.

Early Christian communities fleeing persecution found refuge in the Kadisha. Among these groups were the Jacobites (Syriac Orthodox), Melchites (Byzantine Catholic), Nestorians, Armenians, and even Ethiopians. The Maronites, however, are the dominant Christian group in the valley. From the late 7th century, Maronites fled to the valley from their original areas of settlement in the Levante. At that time, they feared persecution from the Jacobites, who were non-Chalcedonian, and who persecuted Chalcedonian Maronites, and from Islamic attacks. Maronite settlement intensified in the 10th century following the destruction of the Monastery of St Maron. The Maronite monks established their new center at Qannubin, in the heart of the Qadisha, and monasteries quickly spread over the surrounding hills.Early Maronite settlement in the valley combined both community and eremitic life.

Eight well preserved natural mummies of Maronite villagers dating back to around 1283 A.D. were uncovered by a team of speleologists from the GERSL scientific organisation in the Qadisha Valley between 1989 & 1991. These were found in the 'Asi-al Hadath cave along with a wealth of artifacts.

Christian monasticism in the valley

The Kadisha (Holy) Valley is the site of some of the most ancient Christian monastic communities of the Middle East. The valley’s natural caves, being comfortless, scattered, and difficult to access, provided monks and hermits sufficiently isolated and inhospitable conditions to live out Christian solitude, contemplation, and devotion. Many of the caves and irregularities in the cliff-sides were adapted to serve as individual dwellings (cells), chapels, and monasteries, and such buildings were further carved out of the cliff faces of the valley. Some have interiors covered with frescoes and facades. Around the caves there are terraced fields made by the hermits for growing grain, grapes, and olives.

While there are numerous monasteries in the valley, there are several main monastic complexes:

The Qannubin Monastery Deir Qannubin دير قنوبين, is on the northeast side of the Qadisha Valley. It is the oldest of the Maronite monasteries; although its foundation is often attributed to the Emperor Theodosius the Great in 375AD, it is more likely that it was established by a disciple of St Theodosius the Cenobite. For the most part it is cut into the rock cliff side - monastic cells, church, cloister, and accommodation for travelers.

The Monastery of St Anthony of Qozhaya

The Monastery of Qozhaya (Deir Mar Antonios Qozhaya دير مارانطﻮنيوﺱ ﻗﺰحيا sits on the opposite flank of the Qadisha from Qannubin Monastery. Tradition has its foundation in the 4th century by St Hilarion, in honour of the Egyptian anchorite, St Anthony the Great, though the earliest documentary records date back only to around 1000AD. It was destroyed in the 16th century but quickly restored. It comprises a corridor, meeting room, and chapel, with a mill and a number of hermitages cut into the rock nearby.

The Monastery of Our Lady of Hawqa

Saydet Hawqa is situated at an altitude of 1150m between Qannubin and Qozhaya Monasteries, at the base of an enormous cave. It was founded in the late 13th century by villagers from Hawqa. The hermitage appears to have been located on a wide platform at mid-level, where there is a water reservoir fed by channels. The upper level, only accessible by ladder, is a cave some 47m long, where the wealth of medieval pottery and arrowheads that have been found suggests its use as a refuge. Traces of fortifications have also been found in the Aassi Hauqqa (cave) at 1170m altitude. Archaeological finds show that this cave was in use in Palaeolithic, Roman, and medieval times.

The Monastery of Mar Sarkis

The Monastery of Mar Sarkis, also called Ras Al Nahr, overlooks Ehden, Kfarsghab, Bane and Hadath El Jebbeh. Given its exceptional location overlooking the valley at an altitude of 1500m, the monastery is called the Watchful Eye of Qadisha. It is dedicated to Saints Sarkis and Bakhos (Saints Sergius and Bacchus). The name Ras Al Nahr means the top of the river as it is in the vicinity of the Mar Sarkis source, the main contributor to the Qlaynsieh River which joins the Qannubin River in the valley.

The first church of Saints Sarkis and Bakhos was built in the mid 8th Century A.D. on the ruins of a Canaanite temple dedicated to a god of agriculture. Next to it, another church dedicated to Our Lady was constructed in 1198 A.D. Several buildings were added from 1404 till 1690, when Patriarch Estephan Douaihy restored part of the buildings.

The Monastery of Mar Lishaa

Mar Lishaa or St Elisha (دير مار ﺃليشع), mentioned first in the 14th century, is shared by two communities, a Maronite solitary order and the Barefoot Carmelite order. It consists of three or four small cells, a refectory, and some offices; the communal church includes four chapels cut into the rock-face.

There is another group of monasteries in the adjoining Hadchit Valley (Ouadi Houlat). These were founded by Ethiopian Monophysite monks expelled from the neighbouring town of Ehden and occupied by them before their communities scattered elsewhere. They include the hermitage-monastery complexes of Deir es-Salib, Mar Antonios, Mar Semaane, and Mar Assia, along with the isolated chapels of Mar Bohna and Mar Chmouna.