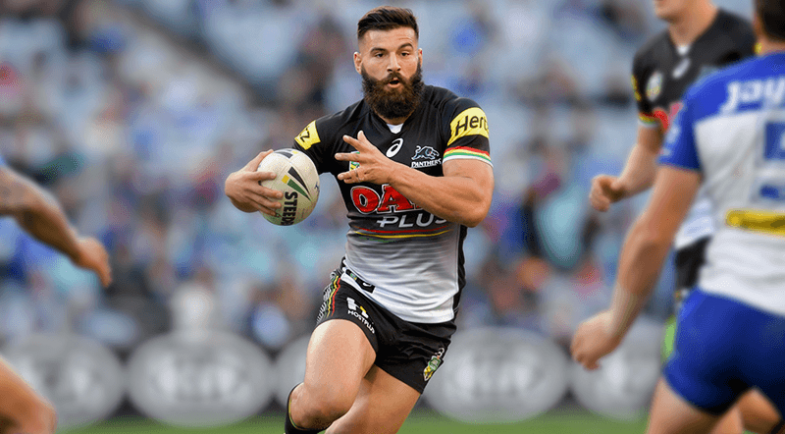 Mansour has set his sights on playing in the Rugby League World Cup after a making a successful return from knee surgery in Penrith’s 38-0 defeat of Canterbury.

Mansour, who tore his anterior cruciate ligament in a training mishap during last year’s Four Nations tournament, is eligible to play for Australia and Lebanon, for whom he qualifies through his father, Fidel.

The 26-year-old winger played three Tests for Lebanon as a teenager in 2009 during their unsuccessful campaign to qualify for the 2013 World Cup and has represented the Kangaroos five times.

He also played all three State of Origin matches for NSW last season but after six months on the sidelines doesn’t expect a Blues recall and is instead focused on the World Cup.

“I WANT TO FINISH THE SEASON STRONG AND TAKE MY FORM INTO THE WORLD CUP."

“I’m very relieved to be back and happy but I can’t get too carried away. With an ACL it’s a minimum six months [recovery] and usually it takes around 12 month to actually completely heal.

“I did everything I could to get to this point so I need to keep backing myself and believing.”

Mansour’s recovery from a knee reconstruction after six months and three weeks was quicker than most players who suffer a similar injury and a testament to the hard work he put in to get back on the playing field.

“It’s been tough but you’ve got to get on with it. Everyone has obstacles in life and this was my biggest one,” he said.

“I just wanted to show the boys I wasn’t going to give up and work hard to get back on the footy field. I was pretty much training by myself every day and I am not the best spectator.

“It’s nice to see the boys win but it is also frustrating because you want to be a part of that winning culture. When you see them lose you feel helpless because you can’t do much.”

Mansour capped his comeback against the Bulldogs on Sunday by scoring a late try and he ran 180 metres with the ball, as well as setting up a try for halfback Nathan Cleary with a kick.


“THERE WAS A LOT OF EMOTIONS COMING INTO THE GAME, A BIT OF NERVES, BUT I COULDN’T BE HAPPIER WITH THE WAY IT FINISHED.”


“The first 20 minutes was the most challenging, just trying to get myself into the game and trying to pace myself. That was the hardest part. Going into the second half I felt my second wind.

“All these thoughts would come into my head — good and bad. You try not to think about it but can’t really help it. I knew if I stuck to what I knew everything would work out. I just had to take the game head on. I just had to come in and play hard.”