Iran or Australia - who will win battle of the undefeated and lift the FIBA Asia Cup 2017 title? 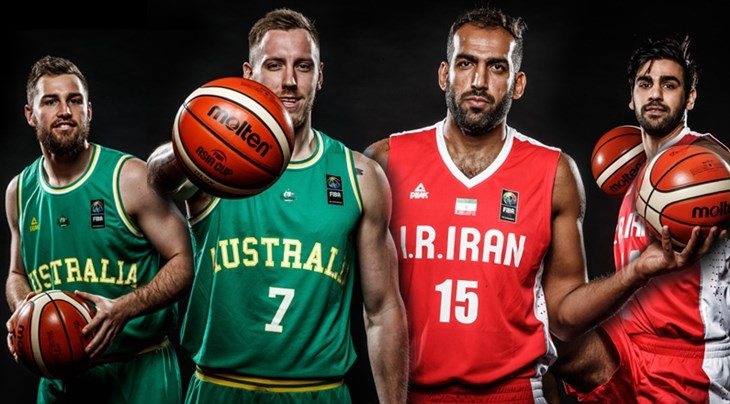 BEIRUT (FIBA Asia Cup 2017) - It is only fitting that the FIBA Asia Cup Final will feature the last two undefeated teams, but will it be three-time champions Iran prevailing or newcomers Australia?

Road to Final: Both teams are coming into this game with immaculate win-loss records. Iran notched victories over India, Syria and Jordan in group play before buckling down to survive against Lebanon and Korea in the knockout rounds. They have an average winning margin of 19.8 points per game. Australia have also gone 5-0 so far, defeating Japan, Hong Kong and Chinese Taipei in Group D before back-to-back wins over China and New Zealand in the knockout phase. They are carrying an average winning margin of 30.0 points per game.

Despite their being more dominant, however, Australia have actually gone through a "tougher" road to the Final. Japan were podium finishers in the FIBA Asia Cup 2015, while China are defending champions and New Zealand topped Group C. That's a testament to the depth of the Boomers, and it only goes to show that they are still the team to beat even now in the Final.

Key Matchups: Both teams have been stellar so far in the tournament, and that's mainly because so many players have stepped up big time. Still, here are some key matchups to watch out for in tonight's Final.

Stopping Iran means stopping their colossal center Hamed Haddadi. At 2.18m, Haddadi is a hulking and imposing figure for Team Melli, and he has really made his presence felt through his scoring, rebounding and playmaking. He averages a double-double coming into the Final, and tasked to try and hamper his production with be Australia's Matthew Hodgson. At 2.11m, Hodgson is not lilliputian by any stretch of the imagination, but even he is dwarfed by Haddadi's size. The 26-year-old Adelaide player has shown a lot of grit and spunk so far, though, so nobody can overlook his ability to stand toe-to-toe with Iran's iconic center.

If Haddadi has been Team Melli's main man, Mitch Creek has fulfilled that role to the hilt for Australia. The 1.98m wingman has been consistently superb for the Boomers, scoring in double-figures in every game and never shooting lower than 56% from the field. If there's one player, coach Andrej Lemanis can rely on 100% of the time, that's Creek, and he will have to do it one more time here in the Final. On the other end, Iran will count on Asia Cup veteran Mohammad Jamshidi to counter Creek's production. The 26-year-old Iranian wingman is playing in his second FIBA Asia Cup Final and his first as Team Melli's top perimeter player. He is among the tournament's leaders in scoring and outside shooting, and that will be crucial as he tries to offset Creek's output in this contest.

One final key matchup to watch is between big men Arsalan Kazemi and Daniel Kickert. Neither player is considered his respective team's overall leader, but both have been instrumental in their success nonetheless. Kazemi has been consistently good for Iran, but he was particularly stellar in their Semi-Finals win over Korea, scoring 19 points and hauling down 10 rebounds while shooting 8-of-9 from the field. He gives up around 9cm to the bigger Kickert, but what Kazemi lacks in size, he more than makes up for in intensity, physicality and hustle. As for Kickert, the 2.08m frontliner has filled the void left by the injured David Andersen. Kickert is known for his range in the Australian NBL, and he has shown it here, hitting nearly 2 triples per game for the Boomers. His size means he can matchup well with any big man Iran throws at the Aussies, but his shooting also means Iranmay have to tweak their gameplan on the defensive end. Key Stats:
For all their pomp and bluster, Iran's bane has been free-throw shooting, which is the reason they nearly blew their game against Korea in the Semi-Finals. Iran missed 9 of their 23 free-throws in that game, and as a team they make just under 60% of their charity shots, which is the worst among all the teams that made it to the Quarter-Finals. If Iran are sent to the line many times in this game, it is crucial for them to make their shots if they want to keep in step with the Aussies.

Even with the presence of Haddadi, Iran actually score fewer points in the paint than Australia. That's not really because of the Boomers' bigs, but rather more because of their attacking wingmen. Guys like Mitch Creek, Mitch Norton and Brad Newley regularly test opposing teams' interior defenses with their strong and aggressive drives to the hole, and Iran better get ready for that. Aside from Haddadi, the pressure will also fall on the shoulders of Kazemi, Rouzbeh Arghavan and Oshin Sahakian to limit Australia's scoring around the basket.

Another big challenge for the Iranians will be their ability to match Australia's depth, which is embodied in their uncanny bench production. The Boomers' second unit score nearly 40 points per game, which is anchored on the production of guys like Norton, Mitch McCarron and Nicholas Kay. For coach Mehran Hatami's squad to counter that, guys like Sahakian, Arghavan and Farid Aslani will need to step up. Knowing Hatami, though, he will probably play his starters for most of the game and rely on their own production to carry the team.

Outlook:
Iran have not faced a team as deep and balanced as Australia, and this will be the first game where the West Asia powerhouse will not be the favorites. Still, they are not unbeaten for no reason, so the Aussies cannot afford to hold anything back in this match. At the end of the day, though, coach Lemanis has the bigger and deeper team, and that may just prove to be enough to tide them past the Iranians.