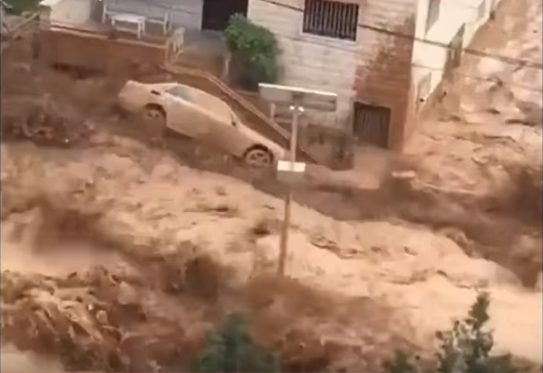 A woman was killed on Wednesday as flash floods invaded the Bekaa border towns of Ras Baalbek and al-Qaa.

The floods came from the Eastern Mountain Range according to the National News Agency.

The water reached levels unprecedented in the region, cutting off al-Qaa's public road near Syria's border, storming homes and shops and submerging groves and farms.

Lebanese Red Cross and Civil Defense crews worked on reopening roads and removing debris from the streets as they offered the necessary assistance to citizens.

President Michel Aoun meanwhile called High Relief Commission chief Maj. Gen. Mohammed Kheir and inquired about the measures that have been taken. The president was also briefed by Lebanese Red Cross chief Antoine al-Zoghbi on the work of the paramedics who were scrambled to the affected region.

Prime Minister-designate Saad Hariri for his part made a series of phone calls from Moscow where he is on an official visit. He asked the relevant authorities to address the damage caused by the floods in Ras Baalbek, al-Qaa, Jdeidet al-Fakiha and Keserwan's mountainous region.

He also instructed the High Relief Commission to quickly assess the damage ahead of paying compensations to those affected.