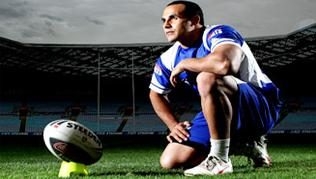 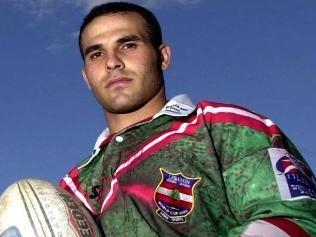 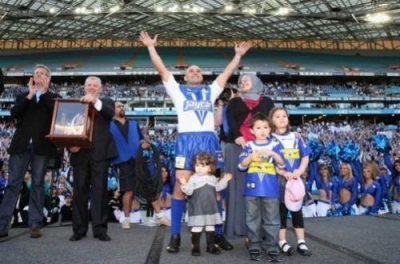 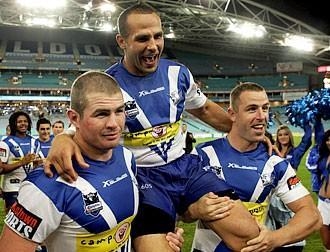 Hazem El Masri حازم المصري‎, born in Tripoli Lebanon (April 1, 1976). Hazem is a Lebanese Australian retired professional rugby league footballer of the 1990s and 2000s. An Australia and Lebanon international, and New South Wales State of Origin representative winger, he played his entire club football career with the Canterbury-Bankstown Bulldogs with whom he won the 2004 NRL Premiership. The greatest goal-kicker of all time, in 2009 (his final season in the NRL) El Masri took the record for the highest-ever point scorer in premiership history and for a record sixth time was the League's top point scorer for the season. He primarily played on the wing, but he has also played at fullback.

El Masri is a self-identified devout Muslim. He is widely respected for his community work with young people, winning the NRL's Ken Stephen Award in 2002. The award recognises players who contribute to the betterment of their community away from rugby league.

El Masri emigrated to Australia with his family from Tripoli, Lebanon in 1988 when he was 12 years old. He began playing soccer at an early age but during his senior years in high school switched to rugby league, joining a local club side, the Enfield Federals.

In 1994, he was spotted by Bulldogs development officers while playing for Belmore Boys High School and was invited to trials for the Jersey Flegg side. The following year he was quickly elevated to the President's Cup squad. He debuted in the Bulldogs' first grade team in 1996 but would not be a regular member of the squad until 1998.

El Masri wasn't the first choice goal kicker at the Bulldogs for his first five seasons at the club because the club also featured renowned sharp shooter Daryl Halligan. It wasn't until Halligan was injured in 1997 that El Masri first kicked for the Bulldogs. In that year's Super League season El Masri scored a memorable hat-trick of tries against English club Halifax.

In 2002 El Masri topped the League's point-scoring table for the first time and rejected a $2million offer from the South Sydney Rabbitohs, opting to stay with the Bulldogs.

El Masri broke the National Rugby League point scoring record for a single season with 342 points (16 tries and 139 goals) in the 2004 season. He also holds the club career points record, surpassing Daryl Halligan in 2005, and most goals scored by a Bulldogs player in a single match with 11 against the South Sydney Rabbitohs in Round 21, 2003.

In 2006, El Masri broke another two club records: the most points scored for a single game (34 points, Rd 2 vs Wests Tigers) and the most first grade tries for the Bulldogs (123, Rd 13 vs Newcastle Knights). He also kicked his 600th goal during that match.

El Masri broke the 1900 point record after scoring 14 points in Round 8, 2007 against the Newcastle Knights, defeating them 30–16 and becoming the sixth player to ever surpass that point, along with Graham Eadie, Mick Cronin, Daryl Halligan, Jason Taylor and Andrew Johns. He broke the all-time highest NRL career point scoring record in front of a crowd of 19,791 against the Manly-Warringah Sea Eagles in round 1, 2009, with a penalty goal on a rainy Saturday night, giving him 2,208 points.

El Masri has played for the City representative side in the annual City vs Country Origin fixture on five occasions and captained the Lebanese team in the 2000 Rugby League World Cup. In 2002, he played for the Australian team against New Zealand.

El Masri was called up to Game 3 of the 2007 State of Origin to make his debut after Jamie Lyon was ruled out through injury. He kicked three conversions from the sideline, and scored the final try, giving him 10 points in total.

Lebanon Cedars' coach John Elias approached El Masri to play a one-off European Cup tie for Lebanon against Russia in Tripoli in October, 2009. El Masri considered accepting this invitation but found himself unable to do so.

In June, 2009, El Masri announced that he would retire from the NRL at the end of the 2009 season. El Masri played his last game on 25 September 2009 against the Parramatta Eels in the preliminary final in front of a crowd of 74,549 people, the largest finals crowd ever recorded for a non-grand final. Following his retirement, El Masri has been approached to stand as a the Liberal candidate for the seat of Lakemba at the next state election.

El Masri made an appearance, kicking a goal, in the opening ceremony of Melbourne's new AAMI Park before the 2010 ANZAC Test.

El Masri is married to Arwa with three children Lamya, Bylaal, and Serine. He was one of the first Lebanese Australians to step forward in the name of friendship and understanding in the wake of the racially motivated 2005 Cronulla riots. In 2007, Bill Woods published an authorised biography, El Magic: the life of Hazem El Masri.

We Love you Hazem and we will miss you sooo much. You are the best