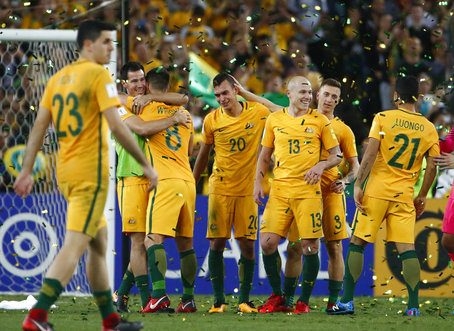 Captain Mile Jedinak's second-half hat-trick fired Australia into next year's World Cup in Russia on Wednesday as they swept past Honduras 3-1 in the second leg of their playoff in Sydney.

The Aston Villa midfielder's free kick went in off Henry Figueroa on 54 minutes, and he then buried two penalties in the space of 13 minutes before Honduras scrambled a late consolation through Alberth Elis.

The final whistle heralded a massive roar from the 77,000 home crowd at the Sydney Olympic stadium as the Socceroos went through 3-1 on aggregate following last week's 0-0 first leg in San Pedro Sula.

"It's overwhelming to be honest. When you are coaching your own nation to burden of responsibility is even greater, you know what it means to the nation and the game," said Australia coach Ange Postecoglou.

He added: "They got what they deserved. It wasn't by luck or chance, they believed in something that we started and right to the end they displayed the resilience and belief that has made me proud all the way along."

After a cagey first half, the game unraveled for Honduras when Jedinak, who has been struggling with injury for several months, struck three times in the last 36 minutes.

"Australia were very strong and aggressive and put pressure on us and tried to neutralize us," Honduras coach Jorge Luis Pinto told reporters.

"The first half was more balanced and the handball (for the first penalty) wasn't intentional."

Scoring chances were scarce in a cat-and-mouse opening period, with the best falling in the 37th minute to Celtic's Tom Rogic, whose shot was well saved by Donis Escober.

Argentine referee Nestor Pitana issued a total of three yellow cards, two to Australia's Matt Jurman and Aaron Mooy and the other to Maynor Figueroa for a foul on Tim Cahill.

Australia were fielding four across the back, with deep-lying midfielder Jedinak adding to the rearguard, but Honduras posed little threat in the first half.

Jedinak broke the deadlock in the 54th minute with free kick which took a wicked deflection off Figueroa, but was eventually credited to the skipper after initially being marked as an own goal.

The goal revved up the Socceroos and the capacity home crowd, and Cahill came close with a looping header but Escober scrambled it away off the woodwork.

Cahill's night was over after 66 minutes, replaced by striker Tomi Juric and met with a standing ovation from the home crowd in salute to his courageous fightback from a recent ankle injury.

The Socceroos tightened their grip when Bryan Acosta was adjudged to have handballed Aaron Mooy's pass in the box and the referee pointed to the spot.

Jedinak stepped up and rammed home the spot-kick and Australia were two-up with 18 minutes left.

Substitute Robbie Kruse was then brought down as he closed in on goal and again the referee blew for a penalty, allowing Jedinak to complete his brace with an identical finish into the bottom right.

"We're very grateful, we're going to another World Cup," Jedinak said. "It's extra special, it was our duty as a nation of football players to get this job done and we stuck to our guns and we got here."

Deep into stoppage time, Elis gave the Honduran fans a fleeting moment of cheer when his shot trickled over the line following a goalmouth melee.