From the world’s highest mountain to the high seas 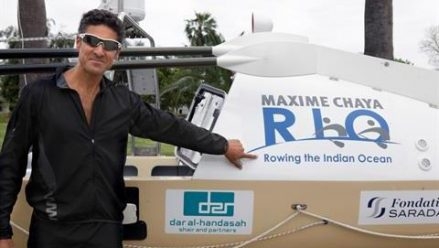 Maxime Chaya, the first Lebanese national to conquer Mount Everest, is gearing up for his next adventure, a 6,500 kilometer trip across the Indian Ocean that sounds like something from the story “Life of Pi.”

He likely won’t face a hungry adult tiger on board. But he and his two teammates will confine themselves to an 8.8 meter rowboat for up to three months starting in mid-June. They will battle the physical strains of seasickness and sleep deprivation, as well as the psychological effects of steady starvation and fears known only to those isolated by an endless watery abyss.

“It’s a simple life: You row, you eat, you rest. You just keep at it. You keep moving, or rather keep inching, westward,” Chaya said, standing beside his boat at the Automobile and Touring Club of Lebanon.

Two other extreme sports fanatics will join Chaya: Livar Nysted, 42, from the Faroe Islands under the sovereignty of Denmark, and Stuart Kershaw, 33, from the United Kingdom. The trio will travel thousands of kilometers from Perth, Australia, to the Mauritius Islands off the coast of Madagascar for a total of 70-90 days. If they succeed, they’ll be the first three-man rowboat to traverse the Indian Ocean.

Their boat was the first of their team to head out, and by now is seabound on a freighter to Australia. It is absolutely miniscule, weighing only 350 kilos unloaded – 1,000 kilos with all their stuff. It will be something like a grain of sand in a swimming pool.

Gesturing to one of two cabins on the boat, Chaya jokingly called it the “royal suite.” The cabins are really only crawl spaces for storage and momentary rest.

And their rest will truly be momentary, as the three men will live on a polyphasic sleep cycle: two hours on the oars rowing, and then two hours off to sleep, eat or maintain the boat. A psychiatrist recommended that every three days one of the men sleep for a continuous four hours. So that will likely make its way into their rigid regimen, Chaya said.

The psychological strain of this unnatural sleep schedule as well as the complete isolation they face on their small rowboat pose a greater danger to their success than the impending physical ailments of seasickness, sunburn or muscular fatigue.

Twelve hours of rowing will burn approximately 12,000 calories each day, meaning the men will have to spend a considerable portion of their off time eating to refuel. Chaya expected each of the men would consume around 6,000-7,000 calories per day, triple the typical intake, and even then, their bodies will have a constant calorie deficit.

In other words, they’ll be starving.

Their diet on the boat will consist of dehydrated foods like chocolate, nuts, dried fruit, meat jerky and lots of freeze-dried meals – the kind astronauts eat in space. Chaya recently tried macaroni and cheese and said it wasn’t so bad.

A jumble of tubes in one of the cabins will be their most vital life source, a filter to turn the endless ocean around them into drinkable fresh water.

“It’s so good you can drink your own pee,” Chaya said, lighthearted despite the looming task before him.

Chaya’s demeanor showed little in the way of worry, but he admitted that underneath his confident exterior, he had his scruples.

In his last adventure, across the North Pole, Chaya was likewise in close company sharing the trek and a tent with his teammates. But they had something that will soon seem like a luxury: the ability to wander away from each other.

“We can’t do that here,” he said, looking over at the rowboat. “That’s going to be a main issue, keeping the team dynamics going.”

“There will be disagreements of course,” he added. “But I think we will be wise enough to put our objective above our personal interests.”

And privacy, forget it: “None at all,” he said.

The three men will be using the age-old “bucket and chuck it” method for using the toilet, and laundry will be done “nile style,” hand washed in the available water around them.

As if their lives weren’t public enough, the boat is equipped with two cameras providing a perpetual live feed via satellite. But Chaya said they would likely allow live public viewing only once a week.

The live feed will also make another new record: theirs will be the first trip across the Indian Ocean to be recorded live for its full duration.

All of this is made possible by solar panels and a wind turbine, which will power two large batteries onboard and keep the rowers in constant communication with the outside world.

Every other day or so, the rowers will be able to live chat with their loved ones. And Chaya bought his teammates iPods for the trip, quite possibly their sole means of entertainment and escape.

Chaya, who shipped the boat off Saturday, named it “tRIO,” in honor of the record-breaking three-man crew. The uppercase RIO stands for Rowing the Indian Ocean.

Chaya said he thought of drawing a name from the seafaring Phoenicians, but thought it might be inappropriate for his European teammates.

In addition to installing all of the electronic equipment, the boat had to be customized for the harsher and saltier conditions of the Indian Ocean, Chaya said.

The boat is self-righting, limiting the chances of capsizing into the ocean, with 16 hermetic hatches and a 200-kilo ballast.

The Indian Ocean has far less shipping lanes than the Atlantic, making a collision with another vessel slim. But fewer boats at sea puts the rowers at greater danger if theirs sinks.

“If push comes to shove, we have a life raft,” he said.

They also have EPIRB, a water-activated distress system, which will be picked up by satellite and transmit their GPS coordinates worldwide.

Their rowboat will arrive in Australia in about 60 days, after which the team will assemble and set off around mid-June, he said. The team timed their trip to fall after the hurricane season, but Chaya expected they would encounter several big storms while at sea.

“There will be rain and high seas,” he said, insisting they would be equipped to withstand them. They will also check in with a weatherman based in the United States to give them daily updates on wind and tide conditions.

While land-dwellers might find potential run-ins with sharks a deal breaker, Chaya said sharks weren’t really a threat and that he was excited to see giant whales and other rare sea creatures.

As his day job, Chaya works as Bank Audi’s corporate ambassador and the bank has played a pivotal role in supporting his adventures. For this particular trip, Chaya and his teammates found other sponsors, the biggest of which is Nescafe, including Demco Steel, Abbott Laboratories, Rotana, Dar al-Handasa, Midis Group and Fondation Saradar. Decaled on the side of the boat is also a sticker supporting the Arthritis Foundation.

Now that the the boat is on its way to Australia, Chaya said that he could get back to his training, which is as much spiritual and psychological as it is physical.

And if the crew makes it successfully to the Mauritius Islands, Chaya said he would be seeing stars – five to be exact: “We don’t count our eggs before they hatch. But if we get there safe and sound, I can assure you there will be partying." 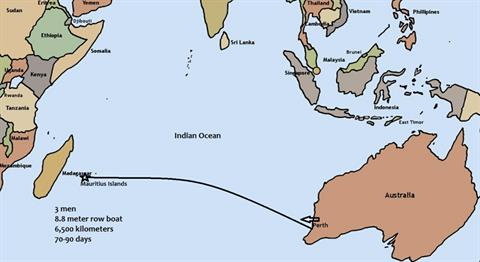 You can check all about this new adventure on this website RowingTheIndianOcean.com