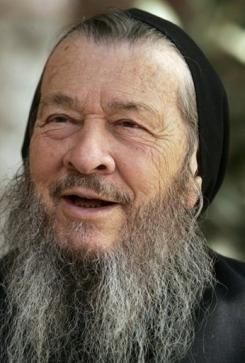 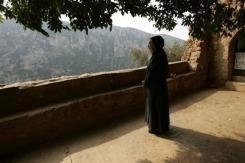 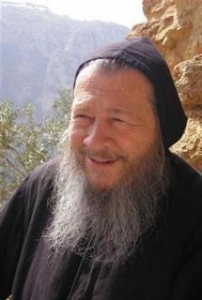 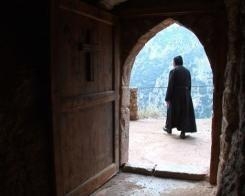 AFP - In his spartan hermitage several kilometres up a narrow footpath in northern Lebanon's Qadisha Valley, only one trait remains from Dario Escobar's previous life: a love of football.

The 75-year-old recluse hails from a wealthy Colombian family and lived a life of ease before withdrawing from the world when he arrived nine years ago at the stone-built Hawka monastery, located inside a cave.

"We lived in a comfortable house in a fashionable neighbourhood. I was a fortunate man," admits Father Dario, whose only possession now is a worn-out hand-me-down black cassock.

The family, comprising his parents and his six brothers and sisters, lived in Medellin in northwest Colombia, though the priest denies any link with the notorious drug trafficker Pablo Escobar, who hailed from the same town.

"Money never made me happy. On the contrary, it brought me headaches. I gave up everything and heeded God's call," said the hermit, who sports a long grey beard and has a deeply creased gentle face.

"Anyone who has tried this life would not want any other," he insists.

Qadisha, nicknamed Valley of the Saints because of its many convents and hermitages, "is the ideal place for prayer and solitude," said Father Dario.

He said he arrived in Lebanon in the early 1990s after meeting a Lebanese priest in the United States who boasted about the natural and spiritual beauty of the country.

He spent several years in various monasteries and hermitages throughout Lebanon before choosing Qadisha as his new home.

A rambler walking far along a rocky, steep trail in the region's lush glades may sometimes catch a glimpse of his ascetic ghostlike silhouette.

"Here I find an inner peace which I would not give up even for the greatest of fortunes," the hermit says, his eyes smiling as he speaks.

Father Dario's pillow is a lump of stone and a wooden board covers a thin mattress, while a cross, a candle and an alarm clock are the ornaments in his tiny bedroom.

"I can no longer sleep on a pillow," he says.

"I eat what I grow. Anything I cannot prepare here they bring me from the nearby convent." His vegetarian menu boasts beans, onions and potatoes all grown in a kitchen garden sometimes raided by squirrels and wild boar.

Father Dario used to be a lecturer in theology, psychology and Biblical Greek but now, "as a hermit, I live in absolute poverty and I am happy like that. No newspapers, no telephone, no television, no radio and of course no Internet or Facebook."

He has not returned to his country, nor seen his family in 20 years.

Apart from a few monks, hikers wandering near his remote hermitage are his sole contacts with the outside world.

"Usually I speak to no one though sometimes people who think a hermit must know the future come and ask me: 'Will I find a husband? A job?'"

And even in his life of seclusion, he has not managed to shut out Lebanon's political upheavals.

"I was asked who will win the elections? What will happen to (Samir) Geagea? To Michel Aoun? How am I supposed to know?" he said laughingly, referring to two rival Christian leaders.

His passion for football no longer plays any part in his daily routine comprising 14 hours of prayer, three of cultivating his garden, two of reading mystical books and five of sleep.

"I am not allowed to sleep longer than that.. nor to cut my beard in accordance with Vatican rules," the recluse says.

In his little office, a skull stands over a bookcase full of lives of the saints. "It is to prepare for death," he says.

Despite his life of silence, Father Dario says he is never bored and even claims that others have a more ascetic lifestyle.

"There is another hermit in the valley but he never talks to anyone. He hasn't for years."