From Beirut to Boston: The Utter Americanness of Khalil Gibran 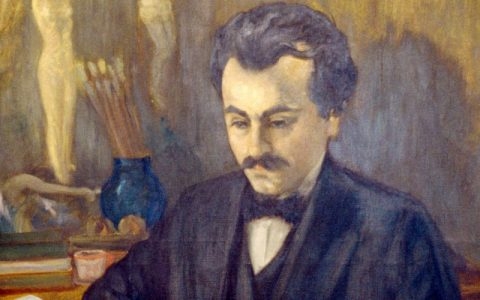 This month, during the annual June wedding frenzy, thousands of officiants will echo the words of a little-known, oft-quoted, exotically-named poet. “Life without love is like a tree without blossoms or fruit,” happy couples will hear, validating their ardor. “And stand together, yet not too near together,” they will be counseled: “For the … oak tree and the cypress grow not in each other’s shadow.” The loved ones assembled—American weddings average 178 guests—will nod empathetically, moved by such dollops of New Age pop wisdom.

The author of these aphorisms and America’s best-selling poet by far—only outsold worldwide by the British playwright William Shakespeare and the Chinese philosopher Lao-Tze—Khalil Gibran arrived at Ellis Island from Lebanon 120 years ago on June 17, 1895. As a twelve-year-old, he was one of 33,289 immigrant children that year, and one of 3.4 million young immigrants from 1892 to 1954, constituting a remarkably peaceful, productive, and creative mass migration.

Approximately 40 percent of Americans today have ancestors who passed through Ellis Island then. Although he never became a U.S. citizen because of his love of Lebanon, Gibran became America’s brilliant bard of multicultural metaphysics. He and other Ellis Island alumni—Arabs and Jews, Russians and Poles, Germans and Italians—pioneered a unique, easy-listening, deeply-rooted culture of the uprooted that was surprisingly universal yet distinctly American.

Born in 1883, Gibran found refuge from Ottoman oppression with his mother and three siblings in a South Boston tenement. By September that year, he was mastering English, although he would remain connected to his Maronite Christian heritage, returning to Lebanon for four years of study in 1898. In America he flourished, thanks especially to a loyal patron and occasional lover, Mary Elizabeth Haskell. His mega-seller The Prophet, published in 1923, would appeal to Depression-era Americans craving uplift and welcoming this mystical, escapist Arabian mysticism amid the 1930s’ privations. By 1957, the book of riffs about love and marriage, freedom and work, clothing and food, had sold a million copies. In the 1960s, The Prophet would enjoy a second popular surge as a countercultural, anti-establishment, New Age Book of Proverbs. Some estimatethat 100 million copies have now been sold.

Tragically, Gibran’s short, tumultuous life ended in 1931, when the 48-year-old profit-making pop prophet died of liver failure—some sources blamecancer, most, cirrhosis. Yet while painting over 700 rich, arresting images, he published over a dozen books and wrote hundreds of poems filled with thousands of eminently quotable, easily digestible, and frequently profound nuggets. Critics, then and now, enjoyed mocking them.Middle East scholars mourn that as the wise mystic from the Orient he—and his successors—were unduly “fetishized.” But The Prophet’s 26 prose poems and his quotable quotes, now available in over 40 languages, has entranced and inspired millions. One fan, John Kennedy, probably took his administration’s name and his “ask not what your country can do for you” line from Gibran’s open letter in 1925, “The New Frontier.” Gibran asked Lebanese legislators: “Are you a politician asking what your country can do for you or a zealous one asking what you can do for your country?” Gibran branded the former “a parasite;” the latter, “an oasis in the desert.”

Somehow, the nearly-century-old ideas of this provincial-born in the mountain hamlet Bsharri in northern Lebanon, still resonate in our super-charged, ultra-wired, high-tech society. Gibran’s resonance reflects the power of the non-mechanized human spirit, the yearning for simple understandings of even our hyper-sophisticated life. “Beauty is not in the face; beauty is a light in the heart,” Gibran wrote, rejecting what we now call lookism. “The most pitiful among men is he who turns his dreams into silver and gold,” he preached, repudiating materialism, noting in The Prophet, “You give but little when you give of your possessions. It is when you give of yourself that you truly give.” And, skewing vulgarity, he claimed “I have learned silence from the talkative, toleration from the intolerant, and kindness from the unkind; yet strange, I am ungrateful to these teachers.”

But more powerful was Gibran’s role in encouraging true diversity of thought, and in expanding America’s intellectual, ideological, and spiritual bandwidth. Embracing his Arab identity, mining his Christian mystic heritage, he helped shape a new American identity. Gibran’s teachings—“Spare me the political events and power struggles, as the whole earth is my homeland and all men are my fellow countrymen”—were sweepingly universal, like the science fiction Foundation Trilogy of Isaak Yudovich Ozimov, aka Isaac Asimov, Ellis Island, class of 1922. Insights that “Tenderness and kindness are not signs of weakness and despair, but manifestations of strength and resolution,” were breathtakingly humanistic and democratic, like Mr. Smith Goes to Washington, Meet John Doe, It’s a Wonderful Life and other films of Francesco Rosario Capra, aka Frank Capra, Ellis Island, class of 1903. And because his mega-selling The Prophet so resonated as all-American, it quickly became iconic and spiritually meaningful, like Easter Parade, White Christmas, God Bless America and other songs of Israel Isidore Baline, aka Irving Berlin, Ellis Island class of 1893.

The German-born American Jewish philosopher Horace M. Kallen labeled this new “Salad Bowl” synthesis “cultural pluralism” in his 1915 essay “Democracy versus the Melting Pot.” Name changes fooled few people, especially in those more ethnically-fragmented, judgmental times. “Deep is your longing for the land of your memories and the dwelling place of your greater desires,” Gibran wrote. These new American artists used their particular cultural identities, and their immigrant otherness, to make America more vibrant and welcoming. They honed the all-American lesson that particular tribal identities can root us, enrich us, and when fused with liberal democratic ideas, propel us toward bettering our community, our country, and the world.

“You are my brother and I love you,” Gibran proclaimed. “I love you when you prostrate yourself in your mosque, and kneel in your church and pray in your synagogue. You and I are sons of one faith—the Spirit.” That eternal, unifying, all-American peaceful lesson, like many of his teachings, is particularly needed today, especially in Gibran’s native Middle East.