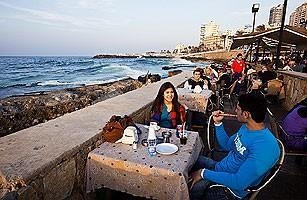 While the rest of the region has been caught up in the turmoil of the Arab Spring, democratic, cosmopolitan Lebanon has been a haven of calm. Local sectarian politics, so often at trigger's edge, seem to be in a quiescent phase, allowing visitors to make the most of laid-back, multilingual Beirut. Occupied since the Stone Age, and now a traffic-choked 21st century metropolis, this is a place where the honking of cars competes with the clang of church bells and the chants from minarets. Here are five great reasons to visit.

1 The National Museum
Lebanon's premier museum once stood amid pine trees; it's now surrounded by the glitzy high-rises of Beirut's renaissance. This 1940s pharaonic-style building is home to artifacts spanning Lebanon's long history, including the sarcophagus of Ahiram, King of Byblos, on which is inscribed the first known Phoenician alphabet — the prototype of modern Western versions. But perhaps the most moving exhibit is the documentary showing the painstaking restoration of the shelled building after the 1975-90 civil war: a testament to the Lebanese people's resilience and appreciation of their shared heritage.

2 Byblos
The Phoenician port that gave its name to bible reached its heyday in the 2nd millennium B.C., though its revival came in the 1960s when luminaries such as Bardot, Brando et al. pitched up there. They went to admire the excavated ruins, crusader castle and Romanesque church, and to eat seafood at Pepe's, tel: (961-9) 540 213, a Lebanese institution that still counts Presidents among its clientele. Only 40 minutes from central Beirut, Byblos retains its air of antiquity and glamour in equal measure.

3 The Corniche
Beirut's 4-km seafront Corniche is popular day and night. In the morning it throngs with joggers and fishermen; evenings are when strollers go to watch the sunset and each other. Teenagers flirt, old men play chess and street vendors peddle espresso, while in the Grand Cafe and Bay Rock café, chic Beirutis smoke water pipes and munch meze.

4 Le Gray Hotel
Martyr's Square sits at the heart of Beirut, near the infamous Green Line that bisected the city during the civil war. It's now being restored, with newly discovered archaeological ruins forming the centerpiece of the Garden of Forgiveness. One of the square's newest additions is the ultramodern Le Gray Hotel. From its roof garden you can gaze at the panorama of Beirut's ever changing skyline. It's within walking distance of the chic downtown business and shopping hub, the must-see monuments of al-Omari mosque and St. George's church, and the artists' quarter of Saifi Village.

5 Chateau Ksara
Wine has been made in Lebanon since antiquity, but it was the Jesuits in the 19th century who established the modern tradition. Chateau Ksara, in the fertile Bekaa Valley around 50 km east of Beirut, is the country's largest producer. Monks first grew vines on the site of the present winery in 1857. Decades later, Roman tunnels were discovered, and these are now used to age the wine. The château offers guided tours with a light lunch and tastings of some of its excellent vintages.