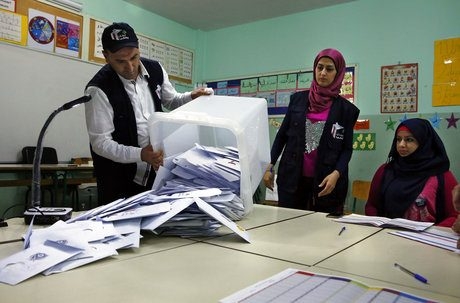 The coalition's campaign meanwhile said its list won four seats in Beirut's second district -- one for Hizbullah, one for AMAL, one for al-Ahbash and one for the Free Patriotic Movement.

According to media reports, the list of Prime Minister Saad Hariri's al-Mustaqbal Movement won six seats in the district as the businessman Fouad Makhzoumi won a Sunni seat.

The FPM meanwhile won two seats in Jezzine, including that of incumbent MP Ziad Aswad.

Elsewhere, FPM chief Jebran Bassil announced that he won a Maronite seat he ran for in Batroun and that the FPM has won a seat in Akkar.

The Marada Movement meanwhile announced that it won four seats in the Batroun-Koura-Bsharri-Zgharta district as three went to the coalition of the Free Patriotic Movement, al-Mustaqbal Movement and Michel Mouawad and three other seats were clinched by the Lebanese Forces-Kataeb Party alliance.

In Tripoli-Minieh-Dinniyeh, the lists of ex-PM Najib Miqati, al-Mustaqbal Movement and ex-minister Faisal Karami were leading the vote count.

In Baabda, the Hizbullah-FPM coalition won four seats as the LF and the Progressive Socialist Party managed to win two seats.