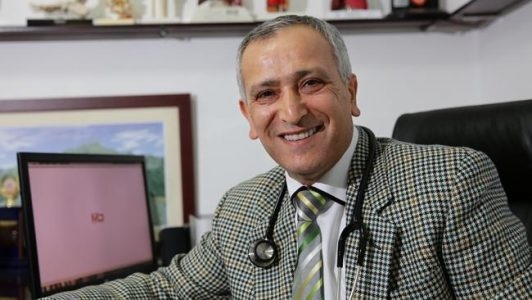 The prestigious 2015 Australian Father of the Year Award has been awarded to Dr Jamal Rif in honour of his devotion to his family, his commitment to his profession and his strong personal efforts to build understanding between Muslim and non-Muslim communities.

The Belmore-based GP and father of five – Faisal, 28, Nemat, 25, Shaza, 24, Sue, 18 and Jihad, 17 – said that accepting the award was the highest measure of success, not to mention the nomination which was “the best [birthday] present any father could have”.

“There are many pointers to measure success but for me, to be nominated for this award is the ultimate measure. You can be successful in every aspect of your life but if you fail with your family, there is no sweetness or enjoyment to that success,” he said.

“I never thought I would be honoured in such a way – I am humbled to be even nominated for such an award.”

“Being a parent is the hardest job in the world. Any parent knows that raising children is a difficult feat, no one challenges you like your own children. This award to me symbolises what is most important and cherishable in life.”

Chairman of the Australian Father’s Day Council, Maurice Newman, said the award recognises Rifi’s achievements as both a general practitioner and community leader.

“The Australian Father of the Year Award celebrates the critical importance of good fatherhood to a child’s development,” Newman said. “Jamal is an upstanding citizen and incredible role model not only to his own family but his patients and so many in the community as well.”

As a community leader, Dr Rifi has worked tirelessly to create harmony in the wider community; he co-founded Australia Muslim Doctors against Violence, helped train youth from Southwest Sydney to become pool guards and lifesavers during his time as President of the Lakemba Sports Club, arranged a community barbecue last year – Muslims 4 Australia – attended by thousands, and has spoken out publicly against Islamic State.

“To be honest I also had mixed feelings as well as a sense of relief, because for a time in the last year or so, I questioned my role as a father. I felt I failed my children because I put their lives at risk following my public stand against the dehumanisation and radicalisation of Islam by the so-called Islamic State – a stand which resulted in a death threat against my family. Now I feel much more comfortable,” he explained.

“You can’t be a father of the year unless you are a father every day, through all the good and the bad times.”

“I believe stable and loving families are the nucleus of society and that fathers have a vital role to play.”

The important role fathers play, both within their families and their communities, was reflected in all of the nominations received, as these two excerpts show:

“My magnificent exciting electrician dad should deserve the Father of the Year Award because he is an excellent role model for all of his four daughters. He helps the community if there are power outages. He should get the award because is a very, very, VERY hard working father.”

“My dad is a single dad and he works on night shift and always finds time for me! He comes to my school every day to tell me just how much I mean to him. My teachers go up to him and say, “Here comes Father of the year” so I’d like that to happen. Whenever we go out and there’s music, he gets up and dances with me because at the end of the day it’s his kid who he cares about.”