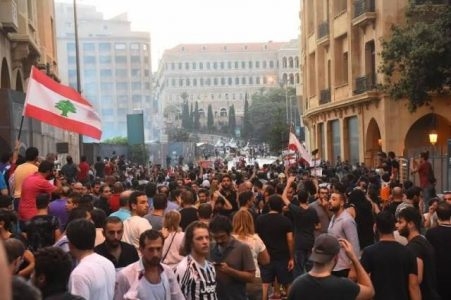 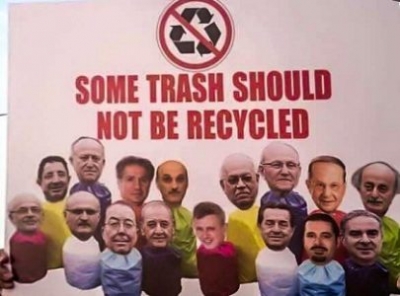 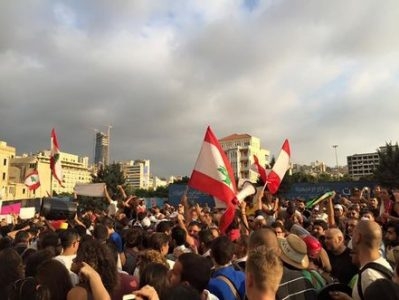 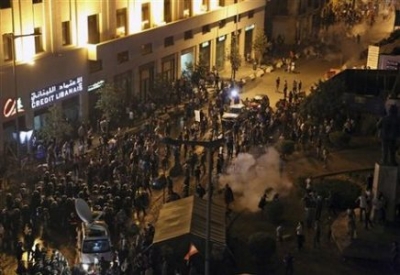 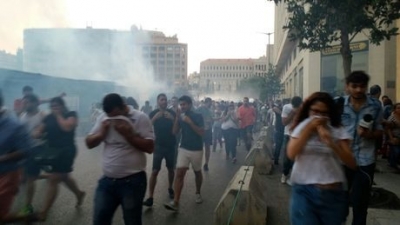 Police used tear gas and water cannon on Saturday to disperse thousands of anti-garbage demonstrators in downtown Beirut's Riad al-Solh square and to stop them from moving towards the nearby Nijmeh Square, leaving scores of protesters injured.

The demonstrators said they were adamant to stay in the area and urged all the Lebanese people to join them but anti-riot police opened fire in the air and broke up the protest with baton charges.

The demonstrators later erected tents near Martyrs' Square, vowing to stay there until police release several activists they arrested during the protest.

Following their announcement, security forces said all the detainees were set free based upon the instructions of Interior Minister Nouhad al-Mashnouq.

A video shot by a protester on a mobile phone showed police opening fire at the demonstrators, which resulted in the injury of a young man in his waist.

Another man was heard shouting “killer” to a police officer.

The clashes turned parts of downtown Beirut into a war zone as the protesters hurled water bottles and rocks on police to stop security forces from chasing them out of the area.

The protesters were seeking to march towards the parliament in Nijmeh Square when the clashes erupted. Security forces had already put barricades to prevent them from reaching the legislature.

The Internal Security Forces said 35 policemen were injured in the confrontation with protesters whom it accused of trying to enter the security zone near the Grand Serail and the parliament.

They shouted slogans calling for the fall of the regime and for the resignation of lawmakers, saying the government is "dirty."

"The people want to topple the regime!" That's a phrase used by protesters during Arab Spring uprisings that toppled governments across the region. Others cried: "Revolution!"

One demonstrator held a placard showing photos of Lebanese politicians placed in trash bags, and saying: “Some trash should not be recycled.”

The Syndicate Coordination Committee and a large number of activists and artists attended the protest.

Several officials expressed regret on the use of force by police.

Education Minister Elias Bou Saab told LBCI: “I am not honored to be part of this government.”

Al-Mashnouq is responsible for the attack on the peaceful protesters, he said.

“This is a dark day in Lebanon's history,” Bou Saab added.

But al-Mashnouq said he is abroad and claimed that he has not asked police to open fire to disperse the protesters.

He also vowed to resolve the waste crisis during the cabinet session next Thursday.

Health Minister Wael Abou Faour urged police not to use force and asked demonstrators not to hurl stones on security forces.

“All those who have taken the decision to use force should be held accountable,” Abou Faour told LBCI.

He urged the demonstration's organizers to form a delegation to meet with Prime Minister Tammam Salam.

“Al-Mashnouq is responsible (for the use of force) and he should leave,” he added.

“All options are available,” he said when asked if Kataeb ministers would resign from the cabinet.

Change and Reform bloc MP Nabil Nicolas suspended his membership in parliament until the officials responsible for the use of force against demonstrators are held accountable.

The attack on the peaceful demonstrators sparked anger on social media.

“I prefer mosquitoes rather than such politicians to rule me,” said an angry Lebanese woman on Facebook.

“The government of water cannon will sooner or later fall,” said a man.

Earlier Saturday, the You Stink campaign, which had organized the protest, urged police to protect them and to not beat them similar to what happened on Wednesday during a demonstration.

The Lebanese government is locked in disputes and has failed to agree on a solution to Lebanon's garbage collection problem after Beirut's main landfill in Naameh was closed on July 17. Trash has accumulated on the streets meanwhile.