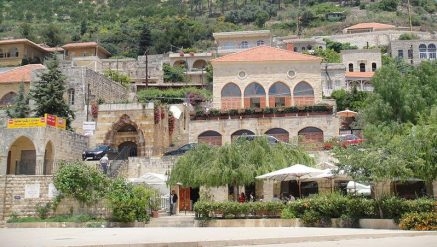 Deir el Qamar is a village in south-central Lebanon, five kilometres outside of Beiteddine, consisting of stone houses with red-tiled roofs. During the 16th to 18th centuries, Deir el Qamar was the residence of the governors of Lebanon. It is also notable for its 15th century Fakhreddine Mosque, Fakhreddine II Palace, and other historical palaces and administrative buildings. The 17th century Deir el Qamar Synagogue is also in the village, although closed to the public. During its peak, the city was the centre of Lebanese literary tradition. It was the first village in Lebanon to have a municipality in 1864, and it is the birthplace of many well known personalities, such as artists, writers, and politicians. It was the capital of the Druze Cancimat of Lebanon (1840-1860).

Deir El Qamar is a Lebanese town known as the Capital of Emirs. From its palaces, Lebanon was governed from the 16th century until the 18th century. People from all religious backgrounds lived in peace, explaining the existence of a mosque and a synagogue in addition to Christian churches in the town. In the year 1860, Deir El Qamar was destroyed during the conflict between Druze and Christians during which the town was set ablaze. The French emperor, Napoleon, sent seven thousand soldiers in order to establish peace and defend the Christians. The dead were buried outside Saydet El Talle Church (Our Lady of the Hill). Later, the remains- called by the inhabitants "the martyrs of Deir El Qamar"- were moved inside the Church. Today, 85% of Deir El Qamar inhabitants are Maronites and 14% are Greek Catholics.

One of the most important historical and religious site in Deir El Qamar is Our Lady of the Hill known as Saydet El Talle. This Maronite church goes back to the 15th century. According to the Maronite Heritage web site, "the legend says that there was a Druze Emir in Baakline looking at the hill of Deir El Kamar. He saw a light coming out of the hill. He gathered his soldiers and ordered them to go in the morning and dig in the land. He said to them: 'If you find an Islamic symbol, build a mosque. If you find a Christian symbol, build a church." The soldiers went in the morning, dug in the land and found a rock with a cross on it and under the cross there was the moon and venus. That was the sign that long time ago, there was a temple dedicated to the moon and venus and later it became a church. Earthquakes and wars might be the reason for its disappearance." The rock discovered by the soldiers can be found above the old gate of the church. A Byzantine column can be found inside the church. The inhabitants honor a miraculous icon of our Lady of the Hill placed behind the altar. It was painted in 1867 by the Italian artist Guerra. On the feast of Our Lady of the Hill- the first Sunday of August - thousands of believers go in a big procession with the miraculous icon from the entrance of Deir El Qamar to the Church.

Another important religious site in Deir El Qamar is the Mount of the Cross where pilgrims visit the Lamb of God Shrine (built in 2007), Father Yacoub Church (restored and consecrated as a church in June 24, 2008) and the Cross (built by Fr. Yacoub in 1932).