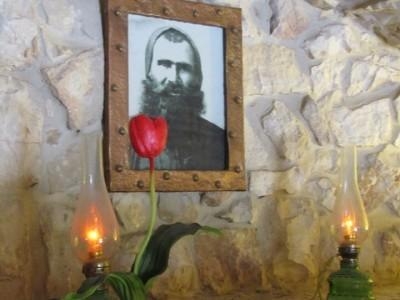 Brother Estephan Nehme was born in Lehfed, on March 8th, 1889. His parents, Estephan Bou Haykal Nehme and Christina Badawi Hanna Khaled were very decent. He was baptized on March 15th, 1889, at Our Lady Church of Lehfed, by Father Gerges Fadel. He was given the name of Youssef.

Youssef grew up in the warmth of his parents. He was the youngest among three boys and two girls. He was pampered by everyone and he brought joy, and he was the angel of the family. He used to run away from noise and prefer loneliness and quiet. When he wanted to pray, he went to a peaceful place where he could meditate and listen to God. He learnt the basics reading and writing as well as Christian teachings principles with the children of the village under the trees near the Church of Saint Estephan. Since his childhood, Youssef loved God and holy Mother Mary. When Her name was mentioned, his heart jumped joyfully especially when he recited the rosary slowly, meditating each word and sentence. He prayed with deep faith and piety. He used to remind his family to start the traditional evening prayer that fermented the members and turn the Christians houses into a paradise corner.
Youssef was not sociable and he was not interested in parties, even among family. On the contrary, he preferred to stay at home and pray late at night. Afterwards, he went to bed and repeated: “God can see me, God can see me. Jesus, Mary and Saint Joseph, help me at the moment of death.”


His integration to the Lebanese Maronite Order

Brother Estephan has demarcated the borders of the Order’s land when the latter bought it. He was conveyed to reveal the marks after a long conflict. When he achieved his mission and resolved the problem due to his perspicacity, his cleverness as well as his good intention, he went back to the Monastery of Kfifane. He was extremely tired and ill.
In the evening, when he was sitting with the other monks, Brother Charbel Nehmeh, before going to sleep, asked him if he wanted to get his jar filled with water, and he answered: “Do whatever you want”. When B. Charbel was heading towards the room of the said monk to bring the jar, B. Antonios Ramy followed him asking: “Where is water?” When he followed him, they found out that B. Estephan passed away.