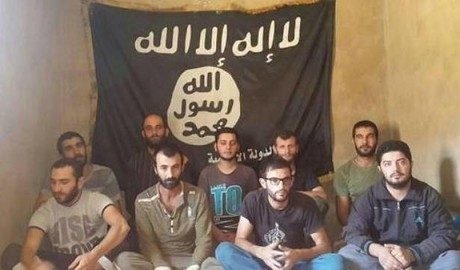 Speaking at the sit-in tent of the relatives of the kidnapped soldiers in Riad al-Solh Square, Ibrahim said two more bodies were expected to be unearthed by the Lebanese army and General Security agency.

Ibrahim said IS fighters who had surrendered led his agency and the Lebanese army to the remains.

“We’re almost certain” that these bodies belong to captive troops, Ibrahim told reporters, although he called for awaiting DNA tests for the final confirmation.

“This file has been closed with a dark chapter… and we have had unconfirmed information on the fate of the captive troops since mid-February 2015,” Ibrahim added, addressing the families of the soldiers.

“In my name, and in the name of the Army Commander, I address a great salutation to the families of the troops over their resilience and patience and they should be proud of their sons,” Ibrahim added.

Relatives of the hostages had gathered for hours in the blistering heat on Sunday to await news of their loved ones, sitting in tents they erected three years ago during protests to pressure the government to find the troops.

Ibrahim also noted that the corpses were found “in Lebanese territory,” while saying that Lebanese authorities do not have information about the fate of Samir Kassab, a Lebanese cameraman who went missing in Syria, and two Syrian bishops believed to be kidnapped by extremists.

“We do not and will not bargain and we’re in the position of the triumphant party who can impose its own conditions,” Ibrahim went on to say.

He had earlier in the day announced that the fate of the Lebanese troops would be unveiled on Sunday.

The announcement follows a declaration by the Lebanese army on Sunday morning that it was pausing its offensive against IS militants along the border with Syria to allow for negotiations on the captive troops.

The armed forces launched their campaign against IS militants entrenched in the mountainous outskirts of the towns of Ras Baalbek and al-Qaa on Lebanon's eastern border on August 19.

Nine troops were believed to still be held by IS after militants overran the Lebanese border town of Arsal in August 2014 and kidnapped around 30 soldiers and police.

Four were killed by their captors and a fifth died of his wounds, while 16 were released in a prisoner swap with al-Nusra Front in December 2015.

The army had said the remaining missing troops were its "top concern" in its offensive against an estimated 600 IS fighters in the hilly border region.

An army source told the AFP news agency on Sunday that its command had agreed to IS' request for a ceasefire in order to get more information on the missing soldiers.

"Abbas Ibrahim has been authorized to negotiate with them for information on the kidnapped soldiers," the source said.

"In the meantime, the battle has stopped. If we find any ulterior motives or if we are dissatisfied with the solution, the army will continue its fight," the source added.

Hizbullah launched its own simultaneous attack against IS from the Syrian side of the border in an area known as west Qalamun.

It said the unilateral pause was "in the framework of a comprehensive agreement to end the battle in west Qalamun against Daesh (IS)."

Two sources with close knowledge of Hizbullah's operations in the area told AFP that fighters from the group were searching west Qalamun for the bodies of the missing soldiers.

The army says its nine-day assault has squeezed IS into 20 square kilometers out of 120 held by the jihadists in the outskirts of Baalbek and al-Qaa.

Six soldiers have been killed since the start of the assault, which the army has insisted is not being coordinated with Hizbullah.

Syria's al-Ikhbariya TV quoted an unnamed Syrian field commander as saying the militants have been driven out of some 200 square kilometers (77 square miles) in Syria. Syrian media say around 400 militants and their families are expected to be evacuated toward Deir Ezzor, a city in eastern Syria that is mostly controlled by IS.

The Central Military Media, an outlet run jointly by Hizbullah and the Syrian army, said the Sunday cease-fire will pave the way for a comprehensive agreement to end the fighting in the area.

And a Lebanese military source told AFP IS would quit territory it held in eastern Lebanon.

"When this happens, Daesh's military presence in Lebanon -- its control of geographic territory -- will be finished," the source said.

But the source warned that IS still had "sleeper cells" in Lebanon.