Beirut is 3rd Hottest destination for 2010... because of its Party People! 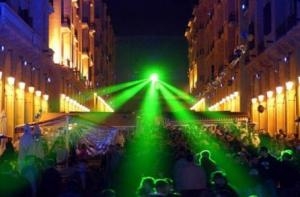 According to the UK-based Mirror, Beirut is 3rd in the Top 10 Great escapes for 2010. Behind South Africa (guess why...) and the Dominican Republic in the Caribbean.

By Nigel Thompson Passport? Check. Spending money and credit cards? Check. Mobile phone? Check. Coughed up for your punitive Air Passenger Duty? Check. Ok, it's now 2010 so Happy New Year and let's book ourselves in for the 10 travel destinations I'm predicting (fingers crossed) to take off this year...

A tap-IN goal from two yards: there will be no hotter destination in 2010 than South Africa for the World Cup. Cape Town is where everyone will want to visit - the Mother City has a marvellous setting and great bars and restaurants. I went a couple of years ago and, frankly, I was mesmerised. If you do nothing else go up Table Mountain and visit Robben Island. The former is the iconic massif which dominates this neck of the woods. Imagine Ben Nevis plonked in the middle of, say, Birmingham and you get the gist. A £12 cable car ride lasting five minutes whisks you 3,500ft up to the top. You can abseil down if you're braver than me. For me, a £16 trip to Robben Island was a must. It's a name synonymous with apartheid - and with hope, since inmates spent so much time on education it was pretty much an unofficial university. Unmissable. It was here that Nelson Mandela was a political prisoner from 1964 to 1982 and a 25-minute ride on a nippy catamaran has you at the dock of this flat, grim island stretching three miles by one. The excellent tour will take you to Cell 5, section B. Prisoner No 46664. Nelson Mandela. No bed, just a blanket on the floor and a bucket for a toilet. If time permits, get a tour to the Cape of Good Hope - the south-western tip of the African continent, next stop Antarctica. GETTING THERE Needless to say during the World Cup it's expensive. However, if you wait till September I found £536 via Dubai with Emirates. Direct with South African Airways is £664. Central, four-star hotels are £74 in September. Thanks to the exchange rate you can eat out for a tenner, including a glass or two of good wine.

Next we're heading to the captivating Caribbean. Normally the preserve of the rich and famous such as that Cowell chappie, it truly is a tropical treat. But now it's become much more affordable. British Airways has launched a twice-weekly scheduled service to the glorious beaches of Punta Cana in the Dominican Republic, with an all-inclusive week starting at £799. Go to www.ba.com. And Florida value specialists Travel City Direct, now owned by Virgin, has expanded into the Caribbean with holidays to the fabulous islands of Antigua, Barbados, St Lucia and Jamaica. A week's self-catering in Barbados starts at £399 with scheduled Virgin Atlantic flights, departing September 1-14. In St Lucia there's a seven-night stay from £699pp room only, departing August 21-31. The price for both includes Virgin Atlantic flights from Gatwick or Manchester. www.travelcitydirect.com.

So long as peace holds, Beirut, Lebanon, could be the coolest hot destination of next year. 3 Are you mad, you ask? Well the 6ft talking rabbit sat next to me says I'm not. Seriously, Beirut is a hot tip of the New York Times. Two high-end hotels are opening this year, the climate is fantastic, the people beautiful, the food fabulous, the nightlife unmatched... It's not cheap, unfortunately. The best price I could find for a three-night break at a central four-star hotel in April was at least £400 a head, flying via Moscow with Aeroflot or via Larnaca with Cyprus Airways. Direct flights with bmi bump the price up to more than £500 a head. Info: www.opodo.co.uk.

Every 10 years since back in 1634 the Bavarian village of Oberammergau has staged its world-famous Passion Play. The 2010 production, which will run over 102 days and be performed up to five times a week on the open-air stage, premieres on May 15. The last play in 2000 was attended by more than 530,000 visitors and this year a similar, if not greater, number is expected. Dertour offers trips to see the play from £829 per person, including three nights' B&B in a four-star hotel in lively Munich and one night in Oberammergau on full-board basis. There are return flights from Heathrow, return transfers from Munich to Oberammergau, tickets to the play, lunch before and dinner in the interval. Info: www.dertour.co.uk or call 0207 290 1111. Coaching specialists Shearings Holidays is reporting good early booking for the play. A six-night B&B break, incorporating Oberammergau and the Rhine Valley by coach, starts at £699 each. See www.shearings.com or call 0844 209 7143.

I reckon Bucharest, Romania's capital, could be big in 2010. I went there in November - there's a nice atmosphere and I liked the slightly chaotic air. There are fine old buildings, the people are friendly and it has a huge amount of history - not least from the 1989 Christmas revolution. And it's cheap. If you missed our coverage last week just go to www.mirror.co.uk/advice/travel and it's in the Europe section. One-way flights from Gatwick start at £49.99 with taxes and charges. Try www.aerlingus.com.

Exotic Istanbul is this year's European Capital of Culture, so plan your visit to this beguiling city of minarets. Outside the eurozone, it's great value for money and there are bazaars, the beautiful Bosphorus and beaches. Don't miss the Topkapi palace or Blue Mosque. The food's great, the traffic's crazy... Ba has three nights' three-star B&B from £188pp this month departing Heathrow. www.ba.com/istanbul or call 0844 493 0758.

Outrageous hit comedy The Hangover has sparked a surge of interest in Las Vegas, the entertainment capital of the world and BA has joined Virgin in operating daily flights. But it's not just a party town or gambling haven, families are catered for, too, with great shows from Cirque du Soleil and Blue Man Group plus A-list music concerts. BA has three nights' four-star accommodation from £479pp, depart January 19-February 7. Info: www.ba.com/lasvegas or call 0844 493 0758 - just watch out for tigers in the loo!

Travel guides Frommer's and Lonely Planet both recommend Abu Dhabi - thought to be the richest destination in the world, bolstered by the inaugural F1 Grand Prix. There are opulent shopping malls, top-notch hotels and the Guggenheim and Louvre museums are under construction. It makes Monaco look like a soup kitchen. A three-night break including flights in April is £496pp. www.expedia.co.uk.

I was in Manchester in November and I reckon it's a cracking city for a weekend break. There's a real buzz with its theatres, shops, museums, bars and restaurants plus a bustling Chinatown. And it has a couple of football teams if that's your thing. It's worth checking out Britain's other great northern cities, too. I've been to Liverpool and Sheffield recently and they are great examples of vibrant, regenerated urban destinations. Leeds and Newcastle won't disappoint either. Check www.nationalrail.co.uk for the cheapest train fares and www.visitmanchester.com, www.visitliverpool.com, www.sheffield.gov.uk, www.leeds.gov.uk and www.visitnewcastlegateshead.com.

And last but not least I think we should support the snow and flood-ravaged Lake District in 2010. The region relies on tourism as its lifeblood so if you were thinking of cancelling a trip there... please don't. It's still beautiful - if a little damp at the mo. And the message from Cumbria is they are very much open for business this year - so let's give them our backing. And anyway, it really is one of the loveliest parts of Britain.

For more information, see www.nationalrail.co.uk and www.golakes.co.uk. Have a great year of happy holidays in 2010!